Meeting The Wiggles, More Than They Are.

I have loved The Wiggles for many years, ever since our eldest two children, now 16 and 14, were tots.  They were always the one children's programme, apart from the Canadian programme, Elephant Show, which didn't make me want to take a rocket launcher to the television.  Four (quite handsome) guys who were real musicians, didn't try and act like children or talk in some sort of artificial way to them.  Any children on their shows looked and acted like real children and not like over-performing stage school clones.  The music was catchy and pleasing to the ear.  Did I mention they were quite handsome?? Oh yes, I mentioned that...

I've always been a bit of a recreational crier (You know the sort of thing...movies, songs..anything else you can think of...though real tears are not unknown to me either, as my other blog can testify to).  Probably more so since I've had little people passing through my life to the strains of Rock-A-Bye-Your-Bear, like the transient little boy in Puff The Magic Dragon.  The days blend into weeks, into months, into years...
Dragons live forever...but not so little boys...or little girls...(I'm making myself cry here) and next thing you have a bunch of mini-adults occupying the beds you used to visit at night to tuck in cute little toes.  The amateur adults are precious too and we love them.  But they're not that interested in choosing a Wiggles DVD to put on to watch.

By the time Louise came along, Peter was six and all the Wiggles VCR tapes had been tucked away to the back of the cupboard.  I hadn't passed them onto the charity shop along with most of the other tapes as they were categorised as sentimental value. We had seen them in concert when Peter was three only to discover to my dismay that velvet-voiced Greg had had to retire due to illness.  Much to John's amusement I spent the whole next day in tears watching YouTube tributes to The Yellow Wiggle! You see they were the soundtrack of my babies childhood.

In the meantime, I had also learned the piano because the instrumental piece 'Music Box Dancer' came on the radio one day.  It's the piece Dorothy (the dinosaur) does her ballet to and I'd never known the name of the music.  Looking it up (tearfully pondering the breakneck speed of the baby years) on YouTube I stumbled on Web Piano Teacher which demonstrated a completely new method of teaching piano to adults who cannot read music.  One of my greatest regrets had always been my inability to even play chopsticks.  A few months later I had Music Box Dancer, Chariots of Fire, Fur Elise, Lean on Me and a few other pieces under my belt.

So one winter's evening some years later, in order to settle a fractious a little toddler girl,  I rummaged to the back of the cupboard and found a video which was still playable on our barely functioning video machine. Louise, who had never been much enamoured by television at all, was immediately enchanted.  Peeping into the room later on I spotted SIX children glued to the TV, and Dad standing in the doorway, also enjoying the music...The Wiggles were back in the family!!

I sent off for replacement DVDs and a few we didn't have already, carefully choosing only the Greg ones. It just didn't seem right to cast him off.

This spring when I spotted that The Wiggles were coming to Ireland and that GREG was back, there was no question of not bringing Louise.  For good measure I got tickets for all the family, figuring that they all clearly love them and could use Louise as cover.  I was looking at their website reading about Greg's return when I had the  notion of sending  them a daring little request...a shot in the dark so to speak...


I sent this e-mail:

I am just sticking my neck out to enquire whether there would be ANY possibility of a very special little girl who will be 2 1/2 when we bring her to the concert in June (along with her 5 siblings who will be using her as an excuse to go) to even have a brief meeting with The Wiggles. Before Louise was born we were told she may not live as she basically has half a functioning heart and she has had two major cardiac surgeries so far with another one due next year. We were also told that should she live she would be unable to walk or talk and probably also have learning and feeding difficulties. She has defied all predictions and in spite of a rare brain malformation (Dandy-Walker) she is like any typical child (from the outside).  Her little half heart is more loving and joyful than many of those of us who have it all going for us.


Anyway, even though she is so young, I think it would be difficult to find a child in Ireland more dedicated to The Wiggles. I originally showed her our old VHS tapes which I had bought for her oldest sisters now 15 & 14 and she was immediately smitten. When she wakes during the night it's Dooorrateeee we hear her calling for. The girls have taught her all the dances and they are doing her a world of good. I would be forever grateful if a little meeting could be arranged. However I am aware that you probably get lots of requests like this and will fully understand if it would not be possible. Would it make a difference if I told you that Louise's Mommy (Me) spent an entire day in tears when Greg retired, much to my husband's amusement! (it was because you were such a big part of my children's childhoods) Well I hope you at least consider my request, Louise will win your heart if you meet her.

Months went by and I figured my e-mail had been just one of the hundreds they receive every day.


Then out of the blue this appeared in my inbox:

Thanks for your email. Sounds like Louise is a little battler as they would say in Australia. We are so glad of the positive impact we are are having in your life. We are happy to add you to the meet and greet.

How many tickets did you get?
Confirming you have tickets for the Saturday 2nd June 11am?

Let me know and I will send a voucher so you can attend the meet and greet.

So today, after all these years, this happened: 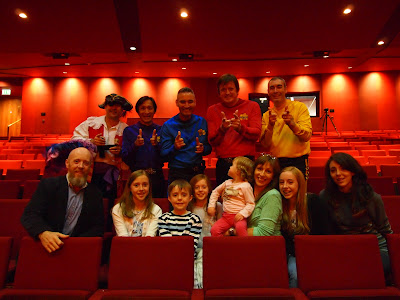 I think my face just about says it all.

Murray, Greg and Jeff are retiring from The Wiggles at the end of this year. This is their farewell tour.  There were tears in my eyes as they waved goodbye.  Goodbye Wiggles.  Goodbye little babies from my family.  Thank you for meeting us.  Thank you for the happiness you have brought our home.  Thank you for being more than you are.