Before I start writing this I'll just clarify...I'm feeling very calm and rational at the moment. So feel free to comment at the end in the safe knowledge that I won't come and find you.

Its about something that strikes the fear of God into the heart of many's the man.. 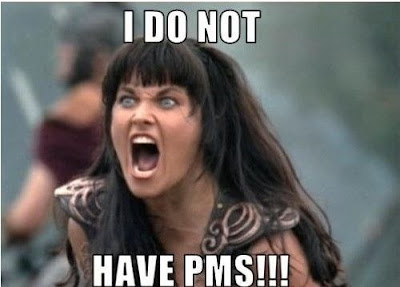 We all know the jokes about PMS or PMT, the stockpile of chocolate and the excuse to crack open a bottle of wine at 11 am and bite the nose off everyone from our children to the courier delivering the flowers our husband has sent as a peace offering.  Jokes apart, I have been mulling about this for quite a while now.  It's not that I'm a particularly severe sufferer, it's more that I'm wondering whether there's a better way.

I'm aware that this is for the most part a sort of girly blog but I know for a fact that there are (quite) a few guys having a little read from time to time, or even all the time..so Guys...this one's for you...and girls, pass it on.  And all of you, let me know if you think I'm onto something or if you have come up with of something better.

When we marry, whether before God or before the state, we usually promise and intend it to be for better...for worse.  I sometimes wonder whether those vows were written with PMS in mind.  For worse all right, for those few days every month when the husband is the sitting target for the sort of wrath which if harnessable could solve the world's energy problems for evermore. Poor men, it's part of their lot.  Or is it?

What does conventional wisdom tell a man to do while his wife, girlfriend...even sister has PMS? 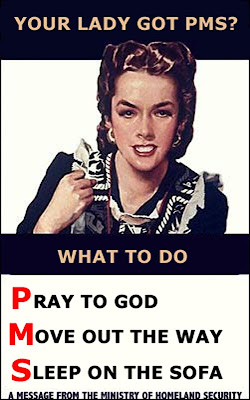 But I'm starting to wonder whether staying away is really the best course of action.  Here's why...

The woman suffering from PMS can look and act like a demon escaped from the pit of Hell but that is not necessarily the way she is feeling inside.  In my experience and from the many girly conversations I've had over the years, anger is not the over-riding emotion a woman feels for those few days. What is more likely is that she is feeling lost, unloved, unsupported, unattractive, in a rut, over-whelmed with chores and children and with no relief or escape on the horizon.  I'm not saying these feelings are grounded in reality or even rational, but they're real.  No matter how expected the slump and no matter how many times it happens on the same few days every month, for those few days you simply can't and don't make the connection and will deny to the last that hormones have any part to play in the notion that your usually content marriage is crumbling around your ears because your husband just doesn't love you...and he doesn't even care...and the children don't even notice all you do...and they don't care either...nobody ever thinks of me...nobody helps...and if I died, nobody would even come to my funeral...because they probably wouldn't even notice I was dead...especially HIM!!

If you're reading this and you don't have PMS you can see through these statements and even laugh at them. If, however, you're having PMS right now you're probably agreeing with each one there and applying it to your own situation and will agree that hormones have nothing to do with this train of thought.

Here's what I think.  When you're married, two become one.  Fertility is not a matter of my fertility, your fertility, the couple is only as fertile as the least fertile spouse.  So too with money, it shouldn't be my money, your money...my this...my that...a marriage is we, us, our. So PMS is not her problem and something to be avoided by the husband in the hope that he escapes injury. It's something that should be dealt with by both of you. Guys...if your wife fell in the river would you stay on the shore and leave her there lest you get your own feet wet?  No you wouldn't...that is, unless you're a very good friend of ours...if you were him you'd catch it all on camera and put it on YouTube!!

Ah no, that was funny really and he's a super husband!! ( I couldn't resist :-))
But in a serious situation I'm thinking that a noble man will forget his own safety or comfort and dive right in there and take that bullet for the sake of his wife.  So if you knew your wife was feeling lost...lonely...overwhelmed...unloved...even if you know it's ungrounded...why on earth would you run away??? I don't see that as being either noble, loving or wise.  All it would do is serve as proof that she's right.  So what I'm proposing to husbands is don your armour, remember that this is the girl you promised to love for better for worse, even though she's not all that loveable right now.  Remember that this is the girl who gets up in the middle of the night to clean up your child's vomit, who puts herself last and who you can be sure has many's the time served herself the dregs of the dinner rather than let you or one of the children go short...now it's your turn... show her that she's wrong. Just because something is uncomfortable, or difficult or downright dangerous...that's not enough reason not to do it.

If you're married more than a wet weekend you should know when these days are approaching.  That's the time to draw on the graces of marriage to go that extra mile.  That's the time to secretly book a babysitter and a table at the restaurant (not forgetting to make sure the children are fed or she'll be convinced you're an uncaring Dad too!) That's the day to go and do that job she hates without her asking you to, whether it's the grocery shopping, putting the children to bed or the night-time clean up.  That's the day to hug your wife and show her 'no strings attached' affection (or she'll be convinced that's the only reason you're 'approaching' her!) I don't think it's necessarily the day for flowers or jewels because you could get it so wrong.  It's the day for the little things...use a bit of imagination..you're the one who married her for goodness sake, you should know her well enough to come up with a little list of things that will make your wife feel loved. If  you can't think of anything a few clicks in the internet will bring up numerous lists of ideas.  One of the the best sites I've come across for husbands is All Pro Dad, it's a treasure trove of great tips.

Try and remember the lovely person she usually is, and whatever you do, DO NOT suggest to her that this is PMS!!!! 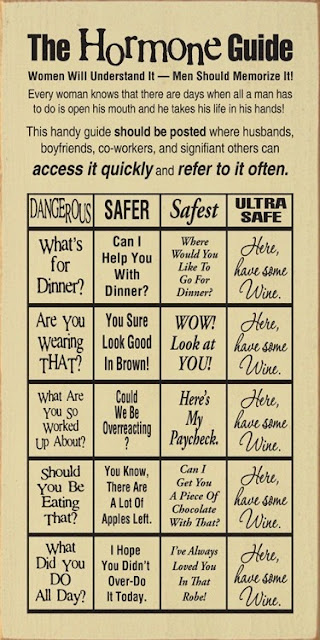 If it all backfires and you get it in the neck, persevere.  In a few days your wife will be back to herself and she'll remember you going that extra mile.

Wives, even if your husband never reads this, It might be a good idea, and maybe even an act of justice, to ask your husband a few days in advance to help you out.  Acknowledging before the event can do so much to reduce the impact.  Remember even if you are in the throes of PMS, you still have some remnant of free will still intact.  Why not exercise biting your tongue a bit next time?

One last thing...I'm not talking in this post about Premenstrual Dysphoric  Disorder which is a serious condition (which has been recognised in court cases as a legal defence).  If you think you or your wife has PMDD you need to seek proper medical help. I'm just addressing your common or garden narky dame syndrome.

Good Luck everyone, I hope you survive!!