The Most Special Kiss I Have Ever Had

I have been contemplating this post for a very long time and as I begin to write, I am not even sure whether I will ever publish it.

The reason why this is a difficult thing to write about is because it is extremely personal and intimate and will surelycause me pain to put into words.  I am aware that it will probably cause pain to some of you reading this who have experienced something similar or who are close to someone who has. I have prayed about this and whether I should write it and my final decision was made when I asked my very wise husband, who this also affects, what I should do. He said he thinks enough time has passed and it is a story which should be told.

So I think the time has come to witness to something I saw with my own eyes and which is forever branded in my heart.  I will never forget what I saw.

I am so very sorry if this brings you pain.

This last two days I have been drawn into a debate on Twitter with some people who are of the opinion that to revere life at it's earliest stages is something zany, unreasonable and worthy of attack and insult.  Also just this week a major world player has announced open season on these little people.  My little story is not going to have a profound impact on the world stage, but it is my story and the story of someone who passed this way, if only for a brief while.

Here is the tale of a little person who was someone.

1999:  I was pregnant with my third child, having already given birth to two cute little girls and miscarried another pregnancy which had never progressed much beyond implantation.  That miscarriage had knocked a lot out of me because I, like everyone else, never thought it would happen to me. Well it did happen but after a healthy baby a year later, I figured my brush with miscarriage was just that-a one-off bit of bad luck.

I was so happy to discover this baby was on the way because it was going to be the first baby whose Daddy wasn't a student (we had married when J was less than half way through Medical School and had our second baby only eight weeks before his final exams!! We were very young and nothing daunted us then!). Well anyway, we were so very very happy.

And then, on a beautiful sunny day in April, when our south facing garden was filled with the fresh hope of Spring, with the onset of pain and the stark sight of bright red on white cotton we realised our little baby hadn't made it.

I am not going to describe those terrible few days of physical and heartfelt pain and grief, I want to tell you something much more beautiful.

My sister was in my house with me when we had the honour of witnessing something which not everybody ever gets to see.  A little baby of six weeks gestation was delivered into this world having lived and clearly just recently died in the loving and hidden  embrace of it's mother's womb.  My older sister and I were both filled with sorrow and grief and pity for this life which was so short but it is very very strange...you can feel two completely different things at the same time.  I was overwhelmed at the honour of seeing with my eyes the most beautiful thing I have ever seen.  There was a little fluid filled 'ball' about the size of a marble, still rigid as if protecting what lay inside.  The ball was translucent and inside as though paused in time was this: 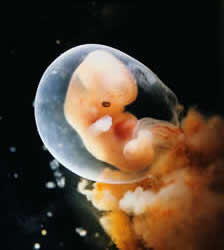 Now the utterly amazing thing was how so very small this baby was, I will always remember it was the exact size of my little fingernail.  The baby was six weeks gestation and perfectly formed and clearly could not be recognised as anything other than a human baby.  The shape was that of a baby, the embryonic tail gone by now.  Two tiny stick like arms stuck out with ball-like tips patterned with faint indentations which had been destined to form fingers. The little legs were something similar but looked more like miniature oars.  Through the filigree chest a tiny heart was nestled, perfectly placed.  The baby's Disney-like top heavy head was bowed forward as though in reverence and a little eye bud on each side like tiny commas.

It was utterly, utterly beautiful.

All this hidden away and formed in just six weeks!!

(The age which my friends on Twitter and elsewhere were calling a clump of cells).

I thanked God for allowing me to see something so very beautiful, and all of this while at the same time another me was filled with a mother's grief for her little child.

Not long afterwards my husband came home and it was then my husband and I experienced the most beautiful kiss either of us have ever had.  We released our little baby from it's amniotic cradle and each of us gave it the only kiss it would ever receive from it's Mommy and Daddy. 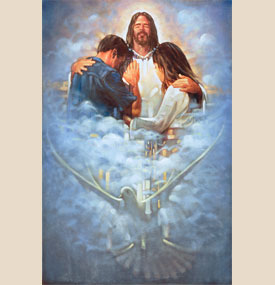 We didn't know what was the right thing to do.  Here was a human remains, made in God's image and likeness, deserving of the respect of any person destined for Heaven. so we telephoned a very saintly priest we knew for some advice. He told us nobody had ever asked him this before but he thought we should give the baby Baptism of desire and prayerfully place the precious remains in a family grave if there was one we could use.

That evening we cut a little piece of lace from my wedding veil and wrapped the baby tenderly in it, kept warm and cosy with a little cotton wool.  We placed the 'package' into the velvet box which had held my engagement ring along with a very tiny crucifix.

We 'waked' the baby overnight beside our bed with a candle and a sprig of the flowering currant shrub which was in full bloom in our garden at that time. 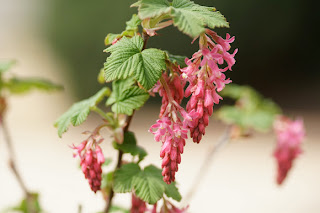 I was filled with tender peace that night and I really think my little son or daughter, now enjoying the Beatific Vision was sending me consolation from Heaven.

How can anybody deny little babies life?

I do not know.