This week Hallie Lord is hosting the lovely idea of a Love Song Link-Up over at her super blog Betty Beguiles. I'm running a bit late with it as it's been going for a few days now...pop over there and check out the romance fest in the other blogs.  I've been listening to some of the love songs, a lot of which are new to me and I can't wait to check out more later. Even nicer because my Wedding Anniversary is today!!

The love songs that mean the world to me are not about John.  They are not about him, they are about someone else who slipped into our lives in secret.  They are not about him but they are about the times when I have felt closest to him and when I realised just how great a treasure I have found in him.  Marriage has lots of moments of intimacy, both personal and physical which are for that couple, not to be shared but to be treasured privately.  There are other moments which can do good, maybe even great good by being told. These moments of intimacy I have already shared here.

I can quite honestly say that I have never felt so close and bonded to my husband as when sitting in a darkened room peering at an ultrasound screen, looking for signs of hope.  I have never felt so close to him as walking beside him out of an operating theatre having just handed over a very unwell two week old.  Or the time when a doctor told us she wouldn't be considered for a donor heart and John said she could have his, and I knew he meant it.

The songs I've chosen aren't about John but he is the one who carried us all through to the backtrack of these beautiful songs...each of which I applied at different times and usually with tears to our little girl Louise. 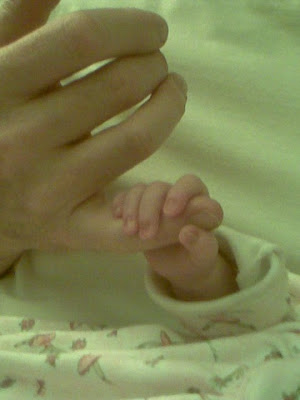 So...Beautiful Louise: These are my songs for you.

We had just holidayed in France.  I felt like a cloud was hanging over me that holiday, I just didn't feel right. When Louise was diagnosed with problems I figured that's what it had been...the marking point of the end of life as I'd known it.  That was until John reminded me that God doesn't send 'omens' of a little child who needs our help and don't be so superstitious. (You can see how he makes up the difference of all I'm not lol) I didn't know until the last day that I was brewing Swine Flu-John's first case in the epidemic which followed.  Unknownst to us, Louise came home from that holiday with us...an answer to her siblings earnest (and secret) prayers.

We hadn't thought another little child would ever join our family and make it and those first few months were filled with the fear of another loss...

We were given a guarded prognosis...which means...prepare for anything...even death..

Long before she was born...it would have taken a lot more than wild horses to drag us away...this song played across the airways that Christmas...


This song came on the radio when we were driving home during her first operation at 2 weeks old...a message to her surgeons, Baby, she's adorable...handle her with care...


The only time I ever asked 'Why Me?' My lowest moment...I posted this song on Facebook that afternoon.


It was only in retrospect that I saw that what had just happened to us was a great gift...

So, Louise, we love you.  You'll never walk alone, we're here and we're here to stay...

And this one because our great gift has brought us so much joy...