I Was Going To Ignore You.

Last year a little incident happened to me which, as do most things, set me off on an interesting train of thought.

It was sometime before the children's school holidays and I was helping to prepare the application for a community grant for a youth activity I am involved in.  We needed to gather receipts, signatures, forms and so on and as usual we were down to the wire as regards timing for getting the application in on time before the closing date.  I needed to have the application form and all the documents on a certain desk before the owner of that desk arrived at work that morning.  So envelope in hand, I dropped the children to school as early as I could and hurried to the Public Offices building...a masterpiece of architectural excess, built with public money in a time when all common sense or frugality  had been abandoned... 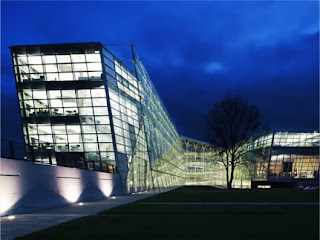 No detail of comfort or finish has been over looked, including a conveniently placed traffic light which seems to be timed to display an extended green light at precisely 5.05 pm Monday-Friday ( I could be wrong about that :-))

It is a magnificent building.

As it was so early I had just plucked a little girl toddler out of her cot and strapped her into the car still in her pyjamas.  I had forgotten to pack the buggy so I just bundled her in my arms and in I went.  I had never been further into this building before than the currently unmanned reception desk so here I was, package in one hand and nonplussed toddler in the other wondering where to go.

At this time of morning nobody had started work yet but people were arriving in dribs and drabs, some smartly groomed, Starbucks in hand, ready for a productive day, others...well...less so...
One of the 'less so' men with a bed-head countenance passed me in the foyer, casting a brief disinterested glance in my direction, coffee, in all probability, being his main (and perhaps only) plan of action for the foreseeable future. He glanced away again and hurried on.  I was preoccupied with my own quest so I barely noticed him until out of the corner of my eye I saw him stop and turn back.

"Do you want some help? Can I help you?" 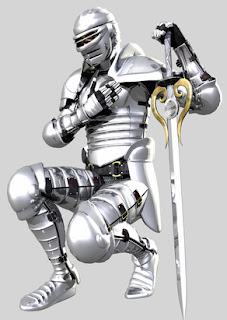 Now I know 15 month olds are one of God's gifts to the human family, they are just so cuddly and aromatic and cute in every way, but every silver lining has a cloud and with the gorgeous 15 month olds it comes in the form of the fact that they are a bit wriggly and have a habit of getting heavier and heavier and heavier when you forget their buggy and have to carry them from the car-park, up the fashionable, if a bit long, entrance ramp and stand around the very nice foyer not knowing where to go.  My arms were getting very tired and a bit sore.

(Well I didn't say that but maybe I thought it.)

Anyway, whatever I said, I got the message across that I needed to get this application in quickly and I had no idea where I was supposed to go.  He started to tell me where the office was then said no, actually, he'd bring me as it was a bit hard to find. When the envelope had been deposited into the box left out for the last minute people such as me, I thanked the young man for putting himself out to help me.

"Well, I saw you and I was going to ignore you and mind my own business, but I saw the baby and I felt guilty leaving you there"

He was honest anyway.

Over a number of months I had noticed a very young couple at early Mass each day.  The girl was very pretty and the young man was handsome.  They were clearly newly-weds and clearly in love with each other, and judging from their devotion, in love with their God as well.  Their missals were printed in an Eastern European script, so I guessed they had married and then gone abroad to work to save for a home.  It wasn't long before their imminent new arrival became obvious and I followed the pregnancy from a distance with interest, looking forward to getting a peep at baby.
Then for a while the young husband turned up by himself and finally the delighted young mother arrived back at mass with her little baby wrapped in blue.

I turned to John and asked him did he think I should go and congratulate them as they were away from home and probably didn't know many people. He said of course I should.

I thought they might think I was nosey.  I was shy.  I was afraid they didn't speak English.  I thought this..I thought that...a million reasons why I shouldn't do that nice thing...and I convinced myself.

I have always regretted that.

So you know, when you get a little inspiration to do a small kind act, it might be a good idea to follow that inspiration.  When you get the chance to say something nice, to help someone, share their problem or even to think well of them instead of presuming ill-intent behind their seemingly bad actions...DO IT.

A very wise American priest passed on this gem of wisdom to me years ago:

How often have you or I waited for a better moment to talk to someone, to address their problem, to do them a kindness or to say 'sorry' or 'I love you' and the better moment never came along?  Better to do a good deed at the inopportune moment than not to do it at all.

So that dishevelled young man made my day because of his 'Random Act of Kindness'.

I wish I had made a young couple's day by admiring their baby. 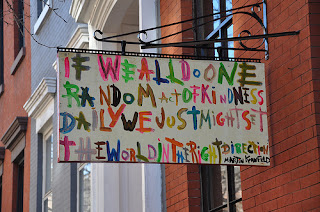 Addendum: As it turned out John and I became very good friends with that young couple and I told them that story.  They told me they would have been delighted, even though at that time the husband's English was poor and his wife's non existent. They have returned home now and have added two more little children to their family...

...and I have congratulated them on both those babies.