For some reason, maybe it's the ebbing of Summer, I don't know, but quite a few people I know both in real life and among my online (also real-life) friends are feeling low just now.

All of us have times like that during the course of our lives and when it hits it can be very difficult to see light or hope at the end of the tunnel.  All the inspirational quotes and beautiful pictures on the entire internet don't really wash when  from our perspective we're living in a rut, or our outlook seems bleak, or just boring.  All the dreams we once held of how our life was going to unfold just look like bubbles that once sparkled with the brilliance of  hope but which are now burst and gone leaving only the memory of something that was beautiful for a while.

I'm not talking about major crises or actual depression here.  I've said it before on this blog, depression is an illness that needs to be attended to sooner rather than later and no amount of 'snap out of it'  advice is going to cure it.  If you think you may be depressed please go to the doctor.  At the very minimum, tell someone.  No, here I'm mainly talking about disappointment or when things just don't seem to be going well, circumstances really.

God works in mysterious ways.  Oh does He now? We've heard that one so often we don't hear it any more.  So God works in unemployment, or monotony, or loneliness, or the myriad of circumstances that aren't what we'd hoped for our lives?


I think He does.

This summer, to celebrate her 16th birthday,  I brought my eldest daughter and some of her friends on a trip around the magical off-the-beaten-track back streets of Dublin.  It was a beautiful and memorable sunny day spent with the loveliest of girls.  We browsed the market stalls, the button shops, the Doll's Hospital and ate lunch in Old Dublin. Just lovely.  We were winding down and I was starting to think of heading home in time to avoid the rush-hour traffic when we stumbled on a little shop whose window display lured us inside.

Whereupon I spotted something I fell in love with immediately. 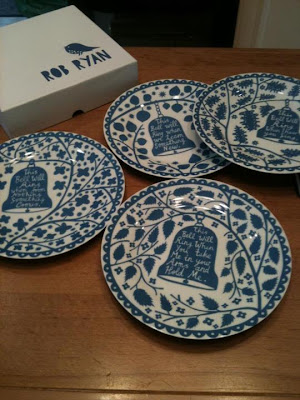 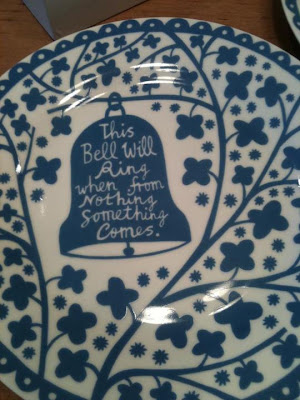 The reason this little phrase grabbed me was because it summed up things that had happened to me.  You might think I'm referring to more recent events but I'm thinking back much further to a different period of my life.

The job I had in my working days was in itself  lovely, always interesting and fun and lots of endearing street-wise children and teenagers to keep us on high alert and the days would usually fly by.  There was one big problem though, with quite a large workforce of un-sackable people, there was an endemic culture of bullying.  Now that wasn't so long ago but thinking of it now it's incredible how little understanding there was then of the seriousness of workplace bullying.  If it were to happen now there would be lots of paths of recourse for people but back then there was no right to reply. The chiefs were horrible to the Indians and that's the way it was.

Some of the 'chiefs' would go so far as to only address an 'Indian' through the medium  of someone with a status closer to their own.(even though it was typical for the younger staff to be more educated and qualified than their superiors).  In fact the head of the entire organisation when sitting on an interview board was known (and I witnessed it myself) to sit sideways to the interviewee and speak over her shoulder, such was her disdain for the necessary 'evil' of staff beneath her. I'm not making this up, it's true. In general the bullying was not personal and there was great comradery amongst the troops. Though it would get everybody down from time to time,  I had never been particularly targeted as such.  That is, until I was transferred to another location and had a new 'boss'.  It has never  happened me before or since for someone to take a total dislike to me.

There was no reason for me to be bullied or picked out because I'm not embarrassed to say that I was damn good at my job.  Work-ethic had to come from within as not working at all was not a punishable offence, in fact many's the time I saw clock-watchers/sick-leave experts get promotion after promotion over the head of good workers simply on their ability to schmooze at an interview.  You see the in-house interviewers knew nothing about their staff because of their attitude and didn't have a clue who was deserving of promotion.  Well anyway, that's neither here nor there, suffice to say this woman took a total dislike to me for no just cause. Now remember that the workplace culture then was no right to reply.  I had no option but to take daily humiliation, constantly being called into her office, smirked at and demeaned.  I was still friendly with the rest of the staff, including four other 'bosses' who all disagreed with the way I was being treated but it was terrible to live like that.  As I'd turn in off the main road every morning to the place I worked I'd feel a cloud descend on me and my palms would become clammy.

I began to think of how I could get away from this rut.  I looked into changing career but that would have meant going back to college and my means were slim to pay for fees and support myself at the same time.  So instead I applied for a career break and my application was accepted.  By word of mouth I secured a job as an au-pair with a family in Palermo, Sicily.  After work every day I'd stay on to learn Italian in one of our language booths and I was saving up every penny for my trip. Soon I'd be free!!

And then my plans came to a standstill.

My mother got Cancer.

I decided to postpone my career break and see how things went but I was still planning to go to Italy.

The Supreme Court in Ireland interpreted a constitutional inclusion which gave unborn babies and their mothers equal protection and which had been put there precisely to give our country protection from the international heave to take away that protection, to mean EXACTLY  the opposite. The unborn in Ireland no longer had constitutional protection.  I'll never forget that night, I didn't sleep a wink.

I cancelled my career break.

So back to my work with no real sign of a letting up in the bullying by my boss.  In some ways I felt sorry for her as I figured that anybody who felt they had to treat people like this couldn't have interior peace or happiness.  All the same, in spite of my continued 'cheerfulness' I was just so down.  My mother was sick, my job had lost any enjoyment that had been there, it was the days of high emigration in Ireland and my original group of friends from my job's halcyon days had mostly headed to England or America, and now I knew I was going to be involved in something nobody should ever have to address.  I wasn't depressed but to be honest, I wasn't too far off it.

Then one day, when I felt I couldn't spend another minute in that place, I sat staring at a newspaper during my break and spotted a notice about a pro-life demonstration at Government Buildings that afternoon.  Just to get away I went and asked for a half day's annual leave.  I was replied with the bitchy response of 'short notice' and 'unacceptable' but both she and I knew the quorum was well covered and she had no choice but to grant the leave.

I took the bus into town and found a good viewing position on the steps of Buswells Hotel to listen to the speakers. 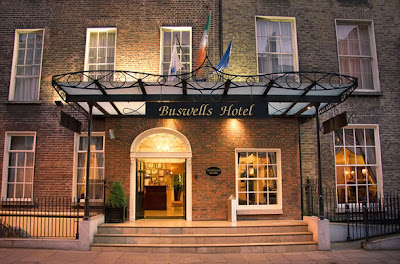 Now that morning in another part of the city a Professor in the Medical School woke up feeling unwell and telephoned the college to cancel his lectures for that day.

One of the lectures that was cancelled was that of a student in Pre-Med.  He was drinking coffee in the canteen flicking through a newspaper that was lying around when he spotted the same notice which had prompted my own half day.  Having nothing else to do before his next lecture, being pro-life and having a certain attraction to swimming against the tide he decided to stroll on down and have a look.  So he took the short walk from his college to Government Buildings, strolled the length of the street and went back to college in time for his next lecture.

Now the girl (me) standing on the steps caught a brief glimpse of the student as he passed,  recognised him as being from her own town, thought to herself  'Oh, he must be pro-life' and thought nothing else about it.

A month or so later as I was sitting with some other young people brainstorming who we could get on board to help us with the up-coming canvass on a treaty which was going to have implications connected to the court's recent misjudgement.  I mentioned that I had seen such-and-such's son walk by the demonstration that day and maybe he'd be interested in helping out.  So I was given the job of tracking him down and asking him.

We have been 17 years married this year.

I am sure God was guiding my path all along,
even though it seemed miserable and thorny.

Because:
If I hadn't been being bullied,
If my mother hadn't gotten cancer,
If baby X hadn't been so unjustly and cruelly treated,
If I hadn't cancelled my longed-for career break,
If a lecturer hadn't been unwell that day,
If the lecture hadn't been cancelled,
If someone hadn't discarded their newspaper
If I had been standing on the footpath instead of the steps... 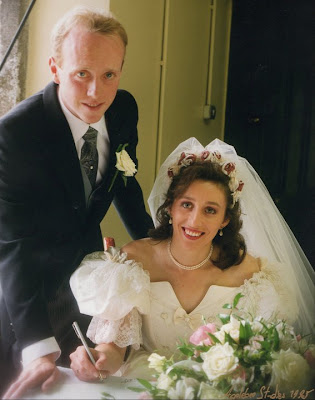 would never have happened... 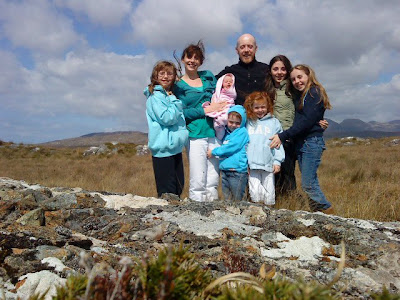 I'm glad my eldest daughter spotted my eyes mist over when I read the caption on that plate as I remembered all that.  I got the plates for my birthday a few weeks later.

If you're feeling low, I hope this story gives you some hope ♥