How I Didn't Tell My Husband I Ruined My New Boots

I don't really shop for clothes all that often. It takes time and the need to try on clothes with small children in tow tends to transform retail therapy into an experience probably requiring therapy. As well as that, with eight to feed and clothe there's usually plenty of things with a greater call on my funds than shopping trips for myself.

I have to say I really find it difficult to pay the money that's asked for decent clothes but I still like half decent  things to wear.  As a result I tend to be a bit of a sales and TKMaxx gal. When I lived at home with lots of sisters I was renowned for arriving home sometime in March wielding my latest bargain which I'd picked up at the tail end of the January sales. Back then I was shaped like a hanger with skin on so I was able to avail of the tiny sized clothes reduced from £100 to 99p.

With a slightly more filled out figure of 'contented spread' I can't find those sort of bargains any more but it still sticks in my craw to splash out on clothes.

Sometimes my husband, who incidentally also loves TKMaxx,  suggests to me that I just go into a proper shop and get something good for myself. I've yet to do that so you can imagine my guilty delight when for my birthday this summer he insisted he buy me these: 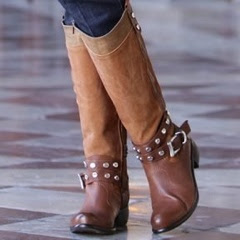 They're probably the best item of clothing I've ever owned and when I put them on I felt like Cinderella slipping into her glass slipper.

I could hardly wait for autumn to come to start wearing my beautiful new boots. Every so often I'd peep into the box to admire and savour the new leather smell like a child anticipating her new back to school shoes and then carefully pack them away again.

The first few times I stepped out wearing them I'd put them on just before going out and then to keep them good, I'd change into my older boots when I returned home. I never never wear slippers and only own a pair in case of hospital trips and I never wear bare feet either. My shoes go on in the morning and on they stay till bedtime.

Well about the sixth time my new boots had an outing I returned home a little late with a hungry family to prepare dinner for. I can't remember exactly what I made but there were boiled baby potatoes anyway. When they were almost ready I decided they looked a bit boring so I thought I'd fry up some chopped bacon in garlic butter and oil to toss the potatoes in to spruce them up a bit.

Just as I was about to serve the dinner to the table I happened to look down and to my utter horror saw that my boots were completely splatted with bacony, garlicky, greasy, ugly...splats. The soft un-sealed leather had absorbed every bit of oil and one boot was much worse than the other. They were quite simply ruined.

I felt the blood flow from my face as at that moment I heard a familiar key turn in the latch. Oh No!!! How can I tell him what I've done to his present??

I grabbed my magic phone and ran past as quickly as I could before he opened the door and as he walked in he caught a brief glimpse of my tail end guiltily disappear around the upstairs banister. The poor fellow followed me up to say hello and was met with

Oh my goodness!! The poor fella! He didn't know what he'd done!

I managed to rasp, now short of hyperventilating with the shock of my predicament. I ignominiously bundled him out of the room before he could spot IT and once he had safely gone down to the children I grasped my magic phone. Click, click, click What am I going to do?? This site, that site, professional restorers...no...send them to the manufacturer...no...and then...a tip which looked manageable. Talcum powder.

Carefully following the instructions I liberally sprinkled baby powder from the tub I'd purchased after the tip I read on this funny post about how good it is for removing sand from skin at the beach (it is), wrapped the boots carefully in a towel and hid them in my wardrobe to be checked four hours later. I nonchalantly returned to the dinner wearing my slippers and continued as though nothing had happened.

Four hours later I slipped away to check my boots, unwrapped them and fluffed away the talcum powder to see...no change. Oh no!! In desperation I repeated the process, this time using much more powder and vigorously massaged it into the stains. Wrapped the boots again and left them overnight.

So there you have it. Baby powder will not only remove sand from legs at the beach, not only turn your baby into an aromatic puff ball...it will also well and truly remove egg from your face.

I told John about three weeks later. Just for the sake of honesty you know.