A Little Bit Of Geneva In All Of Us

When I was quite a newly-wed, my husband and I travelled to France to spend the Easter holidays with a friend who was in his class in Med School.  Six of us made the three day journey from Ireland to the French-Swiss border in two cars-our friend's (who was staying on after we returned to Ireland), and ours.  So the journey home comprised of five of us my little old Toyota  Starlet. 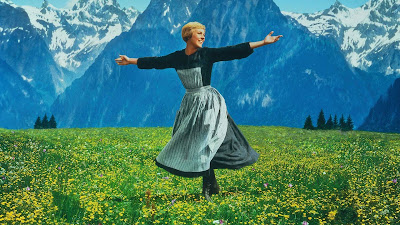 The five of us (not counting all our luggage) included my husband the driver, two young women, a 6 foot something young man and me...6 months pregnant. 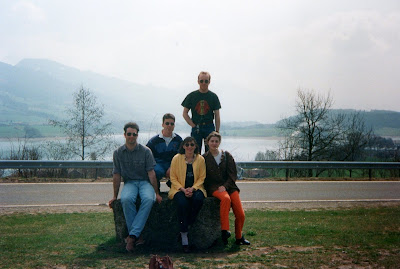 The poor tall student  bravely tried to be chivalrous to the pregnant lady, but every so often his long legs just had to be afforded the slightly more generous leg space of the front seat.  Comfortable it was not.  However, it was my first trip to France so I was delighted in spite of that.  The trip promised the added attraction of visiting Switzerland, possibly the most picturesque place I've ever seen, reminiscent of The Sound of Music...just gorgeous.

Well we did visit Switzerland, I have clear memories of a mountain picnic and me slipping and sliding on the snow of  the Swiss-French Alps, admiring the view of Mont Blanc and trying to ignore the fact that the only footwear I had brought was a thin pair of slip-on shoes. 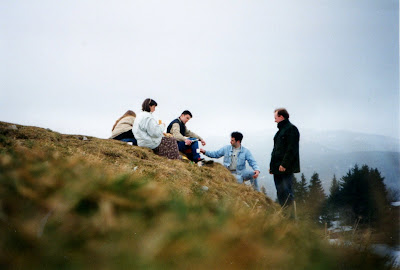 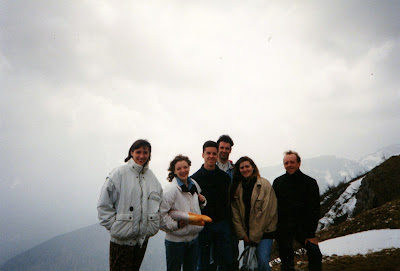 We ate cheese stew in the village of Greuyere and we went shopping in Geneva.

Now I have to remind you that at that time, Ireland was and always had been pretty much one of the poorest European countries.  Luxury was the exception and high end designer brands were more or less sold in a designated corner of one or two expensive department stores.  In Geneva there were no department stores that I could see of.  Every designer, brand-name and luxury item had it's own designated store.  A shop selling just ONE brand?? Wow!  Everywhere you looked was luxury and opulence. 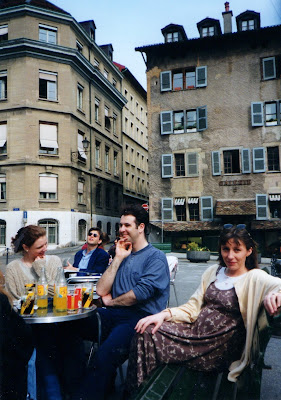 (Orange juice in Geneva and me looking quite nicely pregnant and sitting beside our long-legged friend!)

Not a single person was cheaply or shabbily dressed (apart from us that is:-))  From shoes to shades to designer pedigree dog, everything was the best on the market.  The cars were all top of the range.  My goodness...even the Policemen looked like they were off a Hollywood movie set with their cool boots and chains.  John and I looked and looked for something we could buy as a souvenir of our holiday.  In the end, the only thing in the entire country we could afford was 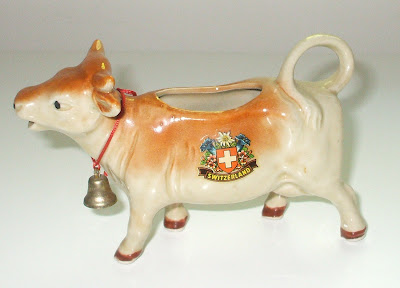 It cost us an arm and a leg!

Well anyway, I remember commenting to John on that trip to Geneva that it would be very difficult for a person living in that sort of material opulence not to be touched by it.  It's easy to resist the lure of consumerism and materialism when nobody around you has any money.  It's a different matter when you're the exception.  Then it's a struggle.  If everyone around you is wearing Italian designer clothes, you could be tempted to feel a bit inferior in your Marks & Spencer outfit.  You have to make a constant effort to not succumb to avarice and envy.

So here's where I get to my point...WHY do I think I need an iPad? 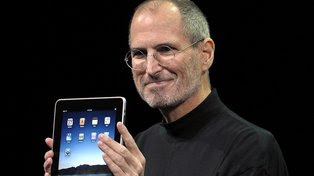 A few years ago we were visiting friends in Scotland.  One of the husbands works in IT and he was explaining to us what an iPod was.  His wife showed us her new iPod nano and how she could hold all her songs there, so tiny, such a clear quality sound...

Christmas came and on cue, a blue iPod appeared under the Christmas tree, along with a black one I bought my metal fan husband. 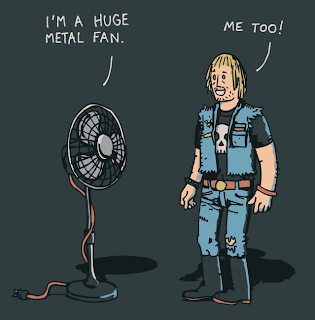 Oh wow! I couldn't believe it! All my...songs...all 300 of them!  Before long I had discovered podcasts, games, it was beyond my wildest dreams.  I'd rave to anyone who was interested enough to listen how they could find the best podcasts, how you could listen to them while you were cleaning. Just Wow!

That was until a few years later I heard of the iPhone. 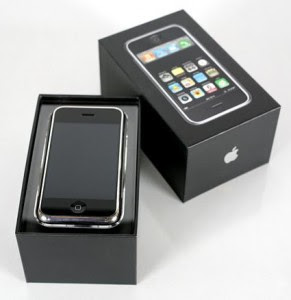 Now this really was beyond my wildest dreams...
Even opening the box was a sublime experience!

We could never have even imagined an iPhone when I was growing up.

It came just in time for me to be in hospital with my little girl.
It would help pass the time.
I could keep in touch,
I could update her blog.
In fact it was the hospital which was the trigger for getting it.

That was an iPhone 3GS and I still have it.

Last autumn when our little girl started to become noticeably breathless indicating that she needs her next operation, I joked to John that I'll need an iPad for the hospital.  I was half joking whole in earnest and as time has ticked by I have been thinking more about getting one.  Maybe an iPad mini? I've priced them. I've looked at them, I've asked around.

So when we met the surgeon last week and he indicated Louise's operation will be in the next few weeks I had a little panic...I've no iPad...what will I do??!! Who will lend me one??!!

A few days ago John asked me  'Why do you need an iPad?'

I had no answer.  My phone does everything an iPad can do.  If I want to watch movies we have a little DVD player.  Last time it was actually a small radio John brought in that kept me most company.  I have a pile of books I'm dying to read but never have time.  One thing you have in hospital is time...plenty of it.  Once Louise wakes up she'll need her Mammy, not an iPad.

Do I want one? 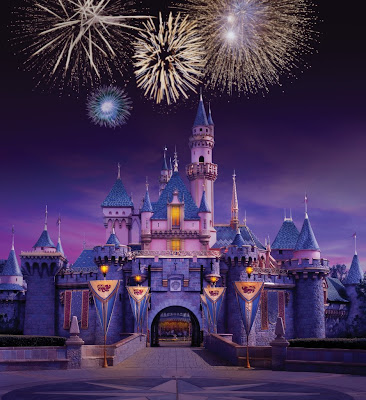 Do I need one?

I wanted an iPad because other people have an iPad.  They look cool and fun.  They're bigger than my phone but mainly I wanted one because I had unknowingly stepped onto the ever increasingly slippery slope of consumerism.  My iPhone 3 is beyond magic to me.  It tells me how to get where I want to go, I can watch a (little) movie if I want, I can photograph my children, I can Facebook my friends, it tells me how to get rid of that stain or what to make for dinner.  There's beauty and news on there, or a debate if I so choose.  How did I get to the point where I was looking at it a feeling a little bit...well...shabby...compared to my friends who have an iPhone 5 or an iPad, or something else I'd like.

I think it's because there's a little bit of Geneva in all of us.