A Bomb Through The Eyes Of A Child

I have had experience of two bombs in my life.  Both of the experiences have left a photographic if surreal imprint in my memory.  I have been listening today to interviews with those present or in the vicinity of the Boston Marathon Bombs and it has brought back those memories into the forefront of my mind, and the thoughts of what fear must have gone through the mind of my father that day.

It was 17th of May 1974.  My family had taken the trip to Dublin city centre to shop for errands.  In those days that's what shopping was.  It was an occasional occurrence, you had a list of essential items to purchase, often including material or yarn with which to make clothes for the children, and you bought them. Then you went home. The children didn't get treats in every shop...or in any shop for that matter, unless it had already been planned and budgeted for. Families in Ireland were short of money in the 1970s.

All of my family were there except for the eldest, my then 14 year old brother who had decided to stay at home to study for his state exams which were approaching a few weeks later. My father parked in the usual car park, a reasonably priced large park manned by a little pay-booth located to the back of Henry St, now the location of The Ilac Centre Shopping Centre.  I'll always remember the cobbled, roundy-stoned dusty surface of that car park, and I'm pretty sure my father does too...since he probably counted every stone in it a few hours later.

Our day seemed uneventful.  My mother needed some items in Arnotts, a slightly more up-market store which would be more fun from her point of view.  She discussed with Daddy whether she should go there first but they decided to get the more mundane items out of the way first, a decision which might possibly have saved all our lives. My mother was about the same age as I am now. My four sisters and I tramped around the necessary shops following my parents.  Men's trousers in Boyers.  Fabric for a dress for my sister in Hickeys.  We then went to the treasure trove for mothers of young families...Guineys on Talbot St., where you could buy children's vests and knickers, nylons,  tea-towels, bed-linen and all sorts of household essentials which were generally good quality at reasonable prices. As usual we spent quite some time there as my mother had quite a list.

Finally we went to Parnell St where there was a little shop which sold sheet music where my father bought some music books for piano and for teaching his pupils in the school where he was the principal. 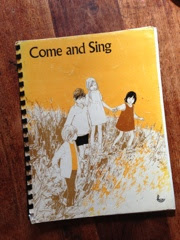 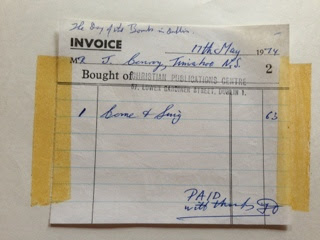 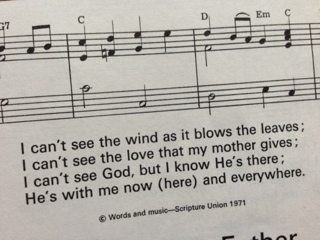 I remember this shop very well because my youngest sister, then 2, got momentarily lost and waited where she was as instructed until my parents retrieved her from outside the door of the shop, a little Georgian building with several steps up to the front door.  I may be wrong but I think the building may have been duck-egg blue with a navy door.

My parents remembered this shop very well too because they paused to buy an evening newspaper from the street-seller near the music shop.

With the essentials done my father said he'd take the little ones back to the car so that my mother and two older sisters could do the rest of the shopping without the fractious tiredness of the smaller children.  I was the eldest of those three.  This was a great occasion I remember because my father bought the three of us ice-cream cones, a very special treat.

After a while, when the two smallest sisters were either asleep or playing in the back of the car I was sitting beside my father in the passenger seat.  Time was ticking on and my mother and sisters should be back soon.

Then, out of the blue we heard a tremendous bang.  I thought it sounded like builders had dropped a huge steel girder from a height.  I clearly remember my father say in shock

Within seconds, from right behind the buildings near us I saw a huge mushroom cloud of smoke. I can't remember the immediate time frame but very soon after that people came running in panic to their cars and drove away from the vicinity as quickly as possible. I don't remember the second bang but my father does...the bomb which killed, among others, the newspaper seller.

My father told the three of us to lie face down in the back of the car and he covered us with his big anorak which he always kept in the car.  At this stage I could hear the three different sirens of police, fire engines and ambulances.

...the sound of cars speeding out of the car-park faded into the distance, leaving...us..the only car left in the car-park...

It's only now as an adult I can appreciate the terror my father must have felt waiting in that silent car-park for his young wife and two eldest daughters.  He couldn't risk leaving to look for them as he couldn't endanger his youngest children.  He must have been frozen in fear.

Finally, the three returned,  bags in hand, completely bewildered as to what was happening. They had been inside a large department store the whole time and had heard nothing until they made to return to the car.

So with his five little daughters lying face down in the car, my father left for home, not knowing whether he was driving to safety or into more bombs.  The quays, the route out of Dublin was choc-a-bloc with cars and ambulances trying to get through.  It must have been a singularly terrifying experience for my parents.

Meanwhile, my brother back home had the television on in the background while he was studying.  There was only one TV station at the time which was interrupted by the newsflash announcing multiple deaths and injuries at the very shop he knew my mother always went to, Guineys.

We had no telephone and neither did any of our neighbours so there was nothing he could do but stand on the step...for several hours...to find out whether his family were ever coming home. 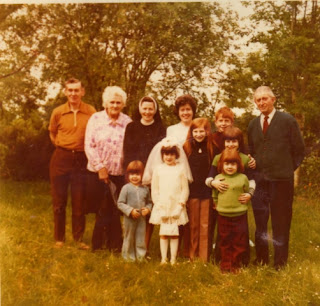 This was my 1st Holy Communion taken one month later.

Other families weren't so lucky.

Here's a short little tribute to the 33 who died that day, including an entire young family, parents and their two baby girls.  A nine-month unborn baby was later acknowledged as the 34th victim.


I was in close proximity to another bomb as a young adult, along with my parents again and one of the sisters who had been 'missing' that day in 1974.  We were returning from visiting my Grandmother and aunt in Northern Ireland and I was availing of the opportunity for some driving experience.  We were passing the border military checkpoint with the patrol soldier examining my driving licence when a bomb went off a very short distance away, missing the target of the soldier.  We were in very real danger but I do not want to write about it.  I saw unbridled terror in that young boy's face that day, I would never like to see that again.

Thankfully nobody was hurt in that incident.

Please pray for victims of terrorism, no matter where they are in the world.  It is almost always innocent people and children who suffer from this terrible terrible blight on our planet.

May God forgive the people who carry out these acts.