This is the Easter Season which I really love.  It's powerful, solemn and then the great joy of Easter Sunday.  What's not to love about it?  During these weeks I'd say people read the Gospels more than at any other time of the year in order to more fully experience Easter.  This year, though, I have been thinking more about another Gospel story...that of the ten lepers, of whom only one came back to say thanks.  And why am I thinking of this story at this time?  I'll tell you why.  But first to refresh your memory...have a little look at this...

Well when we hear this story I think most of us like to align ourselves with the leper who came back to say thanks.  Like in any story with a moral, we'd always do whatever it was the good guy did.  Nobody likes to think of themselves as the shoddy, the lazy...or the ungrateful.

When I started this blog, I promised my Facebook friends that it would be a Louise-Free Zone as I figured (and still do) that there must be people who are sick to the teeth of hearing about her, however inspirational her story may be.  I also wanted to write about other things unconnected to her...things my life's experiences have taught me...things I think about and then the home 'stuff' which is good to help uplift the culturally demeaned opinion of work traditionally associated with mothers and women and the homes in which most of us abide. If I write even in a light-hearted way about my many mistakes and flaws, it's not for the dirty-linen-washing value, it's for the sake of the lesson to be learned from them.

So that said, I am now realising that to totally ban mention of probably the most life-changing and profound experience of my life from this blog would be something of a lack of authenticity.  I haven't managed it anyway as she has been mentioned on and off since the start anyway, one cannot just compartmentalise one's life....this event to this Pinboard...this event to that one...that's a fault in our Western Culture which has led to so many problems...dividing the human person into parts as though they had no connection to each other...the body...the psyche...the soul...so much damage.  So while this most definitely is not Louise's blog, a lot of the lessons I've learned are as a result of her...including this one which shocked even ME.

As you may know, Louise was diagnosed with two major anomalies in the womb.  A heart one and a brain one.  You can just imagine the heartfelt prayers that followed.  Actually, you probably can't because I would never have imagined the depth of pleading with God I was capable of.  I never cared as much before you see.  I prayed and prayed and prayed...please save her...please cure her...

I still accepted whatever was going to present itself on our plate but it's permissible to pray for anything it's permissible to hope for.  And my goodness, did I HOPE.  I prayed our little girl wouldn't die, I prayed the children could cuddle her alive, I prayed she'd survive her surgeries, I prayed she wouldn't be disabled...or disfigured (because the thought of people turning their eyes away from her in the pram in embarrassment  broke my heart) I prayed she'd be pretty...not out of vanity but because whatever she could have on her side I wanted that for her.  I prayed she'd have a tough personality and not a placid temperament too accepting of her disadvantage...I prayed that people would love her.

And while I was praying all these things, my human faults were fighting with me.  Oh yes, we were great, and super and brave and so on and so on...but I was honestly ready to put my fist through the face of the next person who told us that God had specially chosen us...as though Christianity was a computer game.  We'd reached level 10 and had now unlocked our new weapon...the disabled child...

I still don't buy the theory that God made our child sick...He allows it and I can clearly see the great good resulting from her sufferings, but I don't think He was rewarding us by breaking our child.  I really don't think that's how God operates.

Anyway...back to my pleadings with God...there were times when I doubted my own faith in my prayers.  I 100% believed that God could cure Louise...but I didn't think He would.  Because quite quickly I could see the good she was doing and I thought that maybe she was doing more good sick than she would do were she well.  Then I thought that maybe me thinking that was actually preventing her cure because 'If you had faith as small as a mustard seed...' (Matt 17~20) (the colon/semi-colon button on my computer is broken!)
These are all the meandering thoughts I had during those heady months and thank God for John who patiently listened at length to my faulty thinking and reassured me time and again that God is not sitting there waiting for us to be perfect before He decides what best to do.

So when Louise was born we were prepared for a very sick, disabled child who would require intervention to live and that any milestones she were to reach would only be with huge input from therapists of every sort.

What we got was a child
...who required intervention to live..
...who is not disfigured (her face-mark is not always noticeable)
...who is pretty...
...who is definitely equipped with one tough personality...
and who is not disabled.

And this is where the 10 lepers comes in.

When I returned from the appointment with her neurologist who told us he felt that Louise would develop as a typical child with no neurological problems.... 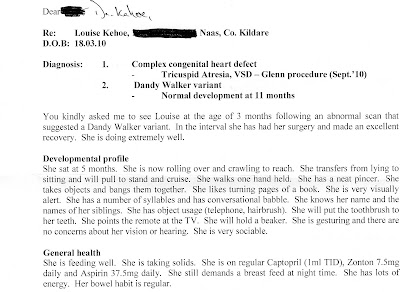 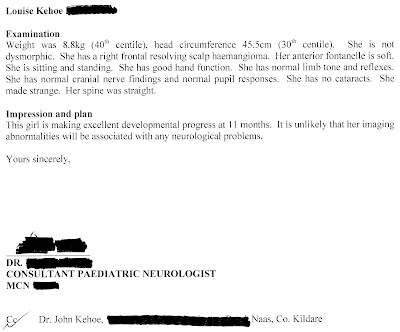 ...I cannot believe what I heard coming out of my mouth...

"If He was going to cure her wouldn't you think He'd have cured the thing that could kill her!"

It was such an ungrateful thing to say.  I didn't mean it. I'm so shocked that I even thought it for a second. I am beyond grateful for how Louise is turning out.  I know and remember every day when she spills or floods or gets at make-up that we could just as easily have been still trying to get her to roll over on a mat on the floor, or to utter her first word.  I am forever grateful.  But at that moment I was like the spoilt brats who spit at their parents on Twitter every Christmas complaining that they got a white instead of a black iPhone.

So while we all like to think that we would be the thankful leper....maybe we wouldn't.

You know the posts about thinking of what we're thankful for and then thank God for that?
I'm suggesting we make a list of the things we're not thankful for...and pray about those things.  And thank Him for all He does that we don't even appreciate and He does it anyway.

Maybe one or two of those lepers came back later? Who knows?

And finally, the wisdom of my husband who reminded me that doctors can do a lot with Louise's heart.  There would have been nothing they could have done to make her not disabled.  God doesn't do for us what we can do for ourselves. 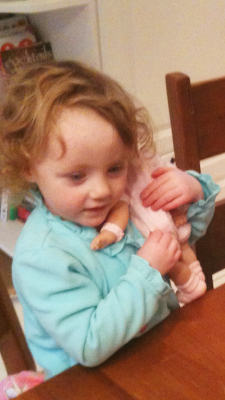