I didn't post last week because I was just back from visiting our eldest on her French Adventure along with our second eldest.  I'm glad to report all is going so well I can see God's hand at work and along with it, the reminder of the futility of worry because as I said before, quoting some saint, while we can only see the chaotic back of the tapestry, God sees the front.

Of course it's easier to say to a parent not to worry than it is for the parent to act on that.  I think some level of worry is part of the package you're handed along with that sweet-smelling mini person swaddled in a hospital blanket.  But aslo part of the package is the building up of precious memories, oftentimes in the form of what seems like insignificant moment followed by insignificant moment tick tock tick tock building the treasure trove of what constitutes childhood.

I came across a picture book a while ago about how unaware a mother is of all those tiny things we do for the last time, like kiss a bumped knee, arrange a toddler's morning snack, read a bedtime story.  To be honest I half think the book should be banned because it just pulls those heartstrings just a little bit too tightly and I cannot even imagine how any mother could possibly read such a book aloud to the end without dissolving into a basket-case wreck of tears.

All the same, it's a thought that has flickered through my mind from time to time over the years, how one time was the last time our now teens dressed up as sparkly princesses, how one time was the last time one of ours uttered her last entrenched piece of baby-talk and said 'I don't got' instead of the more correct but eminently less endearing "I haven't got', one time was the last time I was awoken by a cuddly little boy's huge brown eyes asking so mannerly in his little whisper 'can I come in?' and when I'd ask him a bit later 'do you want to go into your own wee bed now?' and he'd reply 'ok'. He's still the same actually but he never comes into our bed at night.  We still have a cuddly night-time visitor but I know the day will come when she will just turn over in her own wee bed and go back to sleep like the rest of them.

Anyway, I'm saying this because while sitting cross legged on the beds of the doll-house pretty guesthouse in France last week we started reminiscing about the children's TV shows the girls loved when they were small. I'd forgotten quite a few of them and we commented on how programmes just disappear silently from our lives and the new ones slip into their place. Downtown Abbey, The Great British Bake Off, The Dome and Dr Who take up the place once occupied by Teletubbies and Arthur. 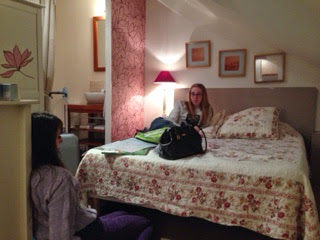 As a young mother with lots of little tots I had a very clear idea of what I wanted them to watch on TV.  Yes, I did, and do, use it as the unpaid babysitter so I could keep on top of housework and meals.  Yes, I admit they did, and do, watch more than the hours recommended by the gurus. Yes we sporadically had family meetings to reasses rules and we'd be the model family for about a week before I'd plonk a bunch of fractious children in front of TV and shove their thumbs into their gobs so that I could hide from them for the duration of a gone cold cup of coffee. Now that I think of it, a family meeting is badly needed to curb electronic entertainment, the struggle never ends, does it?

All the same, I was very very strict about what they watched.  This was long before Pope Benedict came on the scene with his beautifully rich writings on educating children in beauty and the arts so that they could recognise God when they met him.  I already had that insight and would only allow our children to watch programmes which in my opinion had beautiful animation, not over-busy, no shouting all at once, no over-stimulation, no over-acting stage school kids pushing themselves forward while I could imagine their pushy mothers hovering off-screen. No adults annoyingly pretending to be children...yuk!! That's still a bug-bear for me. No main characters displaying characteristics I didn't want to see in my little ones like constant disrespect for 'silly Daddy' (little brat lol) While I pottered around the kitchen and while out driving I'd play calm or vintage children's music and even Lyric FM, no shouting out badly sung wheels of the bus for these little folk. I chose programmes which were gentle, beautiful and edifying.  Looking back, some of the stuff I banned was actually fine but still, I'm glad I erred on the side of over-idealistic.

I asked our two eldest whether I was over restrictive and they both said no way and that they plan to do the same because what they remember is worth remembering. And anyway it seems they still managed to see half of what I'd banned, isn't that exactly what grandparents are for?

Incidently, I've noticed that all our children have their morning alarms set to classical music.  I was in Lidl last month and our, now 10 year old, little boy found a little 4x6 radio and asked me whether he'd be able to set it to the 'man' for his alarm clock. Now Peter is king of alarm clocks, he has them set for all sorts of over-ambitious early rises, places them in unfindable places, never hears any of them and succeeds only in rousing the entire family about an hour before their own clocks were set to go off.  Anyway, the 'man' is the early morning presenter on Lyric FM and I often wonder whether he actually gets people out of bed or simply soothes them back to sleep, forget about school when Marty's waking you up! I went in a few days ago to tuck Peter in, fully expecting him to be asleep, only to find him awake in the dark listening to some late night recital. Cool. (Even if I can't drag him out of bed in the morning, at least his mind is filling with beautiful music!)

So here's what the girls came up with on their trip down Memory Lane~why not join them?

The World of Peter Rabbit and Friends.

This was the jewel in the crown of our children's childhood.  Many's the fretful child was soothed by the gentle timeless stories in this authentic production starring Sinead Cusack. In fact to this day Mr Jeremy Fisher is John's favourite story to read the children. I taped them all off the television...remember you had to key in a long number from the TV guide.  I've just found remastered DVDs of some of the stories online for a very reasonable price.

Brambly Hedge stories are the epitome of homely, secure and beautiful childhood stories.  I personally loved this sort of story myself when I was a child as my mother used to make up hours on end of such adventures to tell us at bedtime, these were the nearest thing. Lovely.

If you're unaware of my special relationship with The Wiggles or you're new to this blog, have a read about one of the best days of my life before moving on.

These little rascals are full of spirit.  It added to our children's macic that the first Sylvanian Family gift they ever received was the houseboat from their Grandmother. There are also boats like this quite near our home.

The Canadian produced Elephant Show was re-run on Irish TV in the late 1990s, they were from the 1980s though I don't remember it from then.  Unfortunately they never seem to have been transferred to DVD.  I just loved the wholesome atmosphere of the show and we have many happy memories of the girls snuggling into me and my huge pregnant tummy watching the shows.  I think I bootlegged every episode and they were worn away to a thread.  The adults were adults and the children were natural and not precocious.  They are available to watch on YouTube though.

Just tell me, what's not to love about Pingu? I wish I could speak that language.  John made good efforts at it over the years to the great hilarity of his children.

Bear in The Big Blue House

Noddy before he was computer animated.  The very opening tune of old Noddy brings back such memories of  really small girls. It was the second VHS I ever bought our first child.  In fact the Noddy doll Santa brought that first Christmas has never been put away and is still going strong. 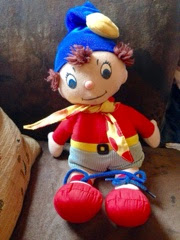 The first VHS I bought was of course...I succumbed to the marketing...


Ahh...it was cute enough all the same...in an annoying sort of way. Though that sun baby looked all the world like little girl #2

I recently bought some DVDs of this show for our youngest who is very cautious of new programmes, she needs plenty of reassurance that there'll be no 'baddies' (he doesn't need baddies with all life has thrown at her)  She just loves it.

There were lots of others that came up such as Andy Pandy,  Neil Buchannan's original Art Attack, that was a great show, Kipper the Dog, Percy the Park-Keeper, the original Fireman Sam which my husband watched with our little boy every day at lunchtime....lots of wonderfully childish entertainment.  Of course there are lovely programmes on now but for some reason, I just don't find computer animation as magical as the older efforts.

But lastly, I want to post the programme I'd watch every...single...day....without....fail...with my cup of coffee from 4pm-4.30.  From it I learned how to properly chop an onion, how to release a vacuum sealed jar by tapping it on the table....and that's about it.  It was just a great bit of 'adult' company when I was up to my eyes in nappies, babygros and  runny noses.  Can you believe, I don't have nappies or runny noses any more but neither do I have time to watch a half hour programme every day at 4pm!!  So much for that!

What are your memory lane children's programmes?  It's amazing how they change so fast.