I have a love hate relationship with Halloween. In this post I want to just put down a few of my thoughts about this autumnal fest.

To be honest, I think the main reason Halloween is probably my least favourite holiday is because it's usually cold and rainy and my children always wanted me to 'go around' with them.  We usually have several events overlapping too so it can be a bit stressful dividing our time trying to fit everything in. I love spring and summer and the remainder of the year I spend looking forward to buttercups and the hum of bees. All the same, I don't hate winter and love movie nights and indoor family time.  Christmas is as exciting for me now as ever it was when I was a child-apart from last Christmas though when my father's house burned down in Christmas Day, a Christmas to remember eh?

So Halloween is there to mark halfway between summer and Christmas.  My husband doesn't like the way our customs of bobbing for apples and trying to make jack-o-lanterns out of turnips (it's a wonder any Irish person my age has any fingers at all, that was a lethal operation!!) have morphed into a money spending festival where home-made costumes made out of old coats and cardboard would be scoffed at. 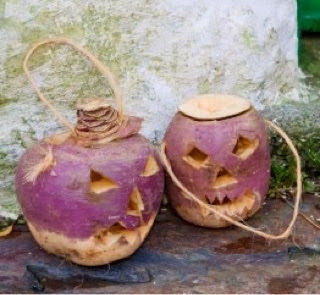 He loved the traditional games and in particular, colcannon, which I still make a very unhealthy but delicious version of every year. He still tries in vain to get our children call trick-or-treat the 'pooka' as we used to call it.  The púka being a mischievous spirit of Irish folklore. Nothing so scary as an ancient Irish fairy, Tinkerbell she was not.

Now this is what I really want to make my post about.  What is the relationship between a family trying to bring up their children in a Christian, or specifically, Catholic, culture and celebrating a festival of the spirit world?

There is a school of thought among some Catholics that Halloween shouldn't be celebrated in the way our culture does with the focus on fright and spookery.  Many of these families dress only as saints in honour of All Saints Day which is the day after Halloween.  What do I think of that? I'll tell you shortly.

I used to read a lot of horror fiction in my late teens and early 20s.  Stephen King mainly, but also other writers.  I loved the thrill of a good scare knowing that the boogeyman couldn't really get me.  I read an interview with Stephen King one time in which he said that his secret was to take the things that people are already scared of, like the dark, under the bed, scarecrows and so on and draw out those ever present fears. A very successful method for any writer, when others can identify with what you say you have a reader.

Then I came upon an article in a Catholic publication that I trusted on the topic of whether horror fiction was a suitable genre of literature for Catholics.  It reiterated everything I already thought.  Horror fiction in itself is morally neutral, depending on the same criteria as any other sort of fiction. I remember when the Harry Potter books were first published there was outrage among some Christians because the topic was magic and that this would lead young people away from faith and toward the occult.  This of course was an opinion I think based in puritanism more than in Christianity. While reading the great Christian themed fiction of Tolkien, Waugh and Flannery O'Connor can edify one's faith, every book we read, every film we watch and every activity we enjoy doesn't have to be overtly Christian to be compatible with Christianity.  Is it a form of clericalism to think that if it's not 'religious' it can't be 'holy'?  I'm of the belief that changing a soiled nappy or taking bins out for collection can be 'holy' acts.  As Pope John Paul said don't see demons where there are none. The Catholics only dressing as saints are admirable and I definitely think All Saints Day is under celebrated but I think it stands as a separate celebration.  We don't need to win back Halloween any more than we need to win back CBBC.  Some things are just fun, so be it.

The same puritans are shocked at my Catholic husband's taste in heavy metal music.  I don't really like that music so poor John normally listens in his car and while exercising, I am often alerted to his arrival home by the boom boom emanating from his car as it drives up the hill! (I'm sure he has a reputation.) However he is so often affronted with the statement/question that heavy metal=devil worship! Nonsense! Apart from anything else, Satan doesn't need to hide in songs when he can draw far more people to his lies much more efficiently through the glitz and empty promise of materialism and the narcissistic me-culture of our day. Metal artists are made up of the same mix of married family men and rogues as any other genre of celebrity.

Back to the horror fiction article, it agreed that there is nothing wrong with enjoying a good old scare, or a ghost story or a supernatural thriller, however the article ended with an open question...is this the sort of literature for one who one day hopes to reside with the Angels?  A good question which shortly afterwards sort of led to the end of my horror fiction diet.  After reading the protracted grief of the father in Pet Cemetery  I never read another. It wasn't a moral decision, it was one based on a desire to feast on something more uplifting.

Now, on Halloween. I have no problem with children having maximum fun through the healthy scares that no other day presents. I love that they spend hours making all sorts of crafts and planning costumes. I have accumulated a pretty well stocked dress-up trunk over the years and I have a policy that no child is bought a costume for Halloween. Any restocking is done in sales and the occasional TKMaxx or charity shop find. Because I love crafts, face painting and so on,  I always end up throwing myself into the fray in spite of my annual protestations that I don't like Halloween. I think my husband thinks my complaints are just a front and that i actually love it all, he could be a bit right there though I'll never admit it .

But I have a reservation and here it is.  Just as my diet of horror gradually needed greater intensity to achieve the same effect, I began to notice in the children a lean toward more and more gruesome make-up at Halloween. I did it myself by making a pumpkin appear to have eaten a child's leg which I copied from an Internet picture. I actually regret that even though it was a bit funny at the time. I allowed the blood and guts until the point that I was horrified two years ago when a very professionally realistic slit throat appeared in my living room done by one of my teens with liquid latex. It was just a bit too real.  The same year I read two interesting testimonies.  They were two unrelated articles about a man and a young woman who had been brought up in and subsequently escaped from satanic communities.  Their descriptions of the lifestyle they experienced as children and the fears they now hold because of the information they know were nothing short of horrific. Worst of all was their descriptions of what happens  every year on Halloween in these underground groups, hiding in full view, if they are to be believed, and I see no reason to doubt the testimonies.  Unfortunately I cannot unread what I read. But there and then I made a decision while not to look for and see demons where there are none, at the same time not to not see them where they are. The occult is very much real and there are real people sucked up in it.  If what I read does take place that night I want no part of it, albeit just through some over-realistic make-up.  I fully agree with the children having lots of fun. One day of eating total rubbish isn't going to affect their overall health and I can stealthily deposit a percentage of the younger children's loot into the bin over the following few days.  However, since then I draw the line at anything to do with horror or torture or any hint of occult or murder on the off chance that a child or a young person is actually living that as a reality that very evening.

I've made a return to my husband's idealised memories of traditional games. 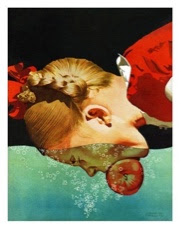 We'll watch Corpse Bride and our pumpkin lanterns are now more cartoony or pretty than fearsome, though I've noticed that false blood is still sneaking in there. Our costumes this year and last veer away from horror or sinister and I'm hoping the children will just extend their imagination in the traditional scares of witches and scarecrows or something funny. In fact the minute I'm finished this post I'm helping my 10 year old with his costume. Yip yip yip might be a little hint. I'll post a picture on my blog
Facebook page later, even if it's a disaster.  Be assured there will be scary steam coming from my ears by the time it's finished! In fact, I'll probably be pretty scary by then! I wish I knew how to use the sewing machine and the only one who does is in France right now. I'll be in bed late tonight that's for sure. Why do I agree to these things? I wonder would hot glue do the same job as hand sewing yards and yards of shedding red furry fabric?

Anyway, Happy Halloween and don't forget the suffering Holy Souls in November. Stay safe and be careful of candles.