Food Is The Food Of Love

We all have to eat and the importance and benefit of a family sitting around a table with no electronic devices butting in, just being a family for that time, are well researched and documented.
But, beneficial or not, the problem of having to eat, and eat ...like...every day...is that ahem...someone has to make the food, whether they like it or not.

Now, having grown up in a large family myself, and making the foolish request of my mother to teach me how to peel potatoes at the age of seven, becoming champion potato peeler by the age of 7 1/4, I learned to cook as part of the course.  My mother was of the generation where bread was baked every day and apple tarts and home made soups were the norm.

Looking back at the meals they were amazing but I'm afraid to say, not always welcomed by my childhood self.  I hated the texture of rice pudding to the point that I couldn't even swallow it.  Bacon and cabbage made my heart sink and barley and huge whole fluffy potatoes cooked in real soup just didn't do it for me.  Home-made chips fried in beef lard and the Scottish dish stovies learned from my Scottish grandmother on the other hand...just a taste of Heaven.  There'll definitely be stovies served every Monday in Heaven when we come in from school.  Home made fudge, jams, cakes...we never had a bought birthday cake in our lives. No expensive presents but my goodness you got cake!! Remember the huge cake in Meet Me In St Louis? Like that, only smaller. 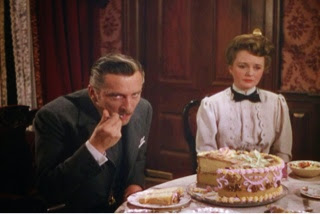 Well speaking of Heaven, this story is a bit about Heaven (as usual, I know).

I've always been well able to cook.  The majority of I make turns out more or less the way the recipe planned.  Dinners were healthy (apart from all the butter and cream) and more or less tasty.  However I had one problem.  I never enjoyed it.  Dinner was the one domestic task I just couldn't muster up much enthusiasm for.  I was fine cooking a fancy recipe for a special occasion or for guests but those every-day meals...oh sigh...in all those years of marriage and motherhood, constantly trying to think of something interesting to make that everyone would eat was just a drag.  I used to moan why, oh why, oh why was I born in Ireland, where every meal begins with tedious potato peeling, my skills having long been surpassed by my immediate older sister who could peel potatoes for the Foreign Legion quite happily.

Many's the time with cranky hungry children and after staring despairingly into the fridge for some inspiration I'd admit failure (and truth be told, laziness) and rip open a bag of oven chips or ring my husband to collect a take-away on his way home.  To be honest, I still don't really enjoy take aways because I just saw them as a mark of failure.  (Yes I know, a bit melodramatic). 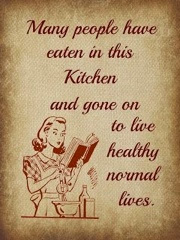 I have always loved food and cooking programmes but cooking myself, not really a fan.

A million times I said to my husband if I could wish for one thing it would be to be hit with a cooking bug.

Then I decided to pray for one.  You know, it's legitimate to pray for anything it's legitimate to hope for, such as winning the lottery, but since everybody's probably praying for that, God can hardly grant everyone's prayer so I think he probably leaves that one to work itself out.  However, I do earnestly believe that God likes families, since he was born into one himself.  And I think he likes mothers, since the most perfect thing he ever created was His own Mother.  And she made dinner...every...single...day...and since one thing Jesus didn't die of was food poisoning, she was probably pretty good.  So if I won the lottery, I'd benefit, but if I got a cooking bug, my children and husband would benefit.

I know plenty of friends who believe that if there is a God, he's a disinterested God who really isn't concerned about our minor concerns.  I don't believe that because coincidence couldn't possibly account for the sheer number of my minor prayer requests that have been answered with finesse. If you want me to address the mystery of suffering on the world, I'll do that another day, today I'm talking about how our seemingly boring requests are important to God.  Although, it must be said, there is one thing I keep asking him for, that he doesn't seem to hear.

I've never had that request fulfilled.

Anyway, I did a little nine day novena, which took me a month or two because I kept forgetting I was doing it. Then I forgot all about it because I figured it's just my personality thing, I was never going to love cooking. Just get on with it girl.   A good while later I read another writer's blog post about how had fallen in love with a (then) new link-sharing site...Pinterest.

This is maybe three years later now and about a month ago it suddenly dawned on me that I actually and most unexpecetedly love cooking.  I love planning my menus, I love finding that obscure ingredient, I love knowing what I'm making and being able to answer my children's question "what's for dinner?" with something that invites the response "oh yum!!"  I love putting something different on the table that I know they'll all willingly eat and enjoy.  And it just slipped up on me.

Can you believe, God is just with it!! Do you think He doesn't know all about social media in all it's ugliness (Twitter), in it's companionship (Facebook) and it's beauty (Pinterest).  He knows I love Pinterest and the little visual holiday it provides so therein he embedded the answer to my prayers.  Inspiration to trigger a love of cooking.  Leading to a less grumpy, and I admit, somewhat less resentful cook.

Everybody in my family has benefited and it took me almost two years to even notice that my little insignificant prayer had been answered in such a fun and lovely way.  What ungrateful children we can be to that good Father. Then I guess, children often don't see or appreciate all their parents do until they 'grow up' themselves.  Just as it took me to adulthood to fully appreciate the delicious meals my mother made, so too, it takes all of us till eternity to appreciate just all that loving Father God does for his un-noticing children. And I think that maybe the beautiful Nazarene woman who so lovingly fed the Son of God might just have had a little something to do with it.  It's just the sort of prayer that's right up her alley.