I'm writing this from the children's hospital where at this moment my little girl is having a brain scan under general anaesthetic. I can't think of anything else to write about apart from this at the moment to be quite honest. What's it really like to have a child with a chronic health condition?

So many people since Louise was born have said things like 'you're amazing' 'I could never do it' 'you're great' 'I'd fall apart' and I can tell you now none of those things is true. I'm neither amazing nor great.  I'm no different to anybody else who does whatever it takes for your child.   Nobody ever thinks they could handle a cross, if you like to call it, like this. Or worse. And yet every day of the week I see people coping with bereavement, illness...all sorts of things they never thought they would ever be able to cope with.

People have said to me God never gives you more than you can handle. I don't think I really agree with that statement either, because it somehow implies that his did this thing to my child. Made her wrong to make me holy. How mean would that be? We don't have a mean God and in fact a precept of Christianity is you can't do wrong even to achieve good.  God's not mean and he didn't break my child.

However, I've found time and again that he helps you handle whatever situation you find yourself in.  Mine, a child who is broken.

I read an article by an Irish journalist a few weeks ago about his daughter who has Down Syndrome.  I remember she was born the first time Louise was in hospital, he wrote a very inspirational piece then...including the promise that he was  going to teach her two important words: Eff and Off.  This time be was writing about the recent talk of the possible discovery of how to 'turn off' the extra chromosome which is present in Down Syndrome.  He was horrified because every cell of his daughter's body has this chromosome, without it she wouldn't be her, she'd be someone different.  She'd lose her her-ness. She's not broken and doesn't need fixed.

This made me think about Louise.  Louise is broken.  She does need fixed.  If I could turn off whatever it was that caused all this I definitely would. No, I wouldn't have turned her away for any reason as medical eugenics presses for babies like Louise, or Mary or any of the other children who eugenicists don't approve of. As my husband said the day she was diagnosed, Louise was always this, whatever she is...she never was anybody else, it's who she is. He also said that whatever her ultimate diagnosis would be, it wasn't going to become our identity.  Louise is Louise, she's not Dandy-Walker or PHACE or CHD.  She has those things, she isn't those things. If I could take them away it wouldn't change her the way taking a child's extra chromosome away would radically change that child.

To all outward appearance, Louise is an ordinary child.  This is precisely where my struggle comes in.  I know she's not an ordinary child.  There is no 'cure' for what she has.  When her consultant wrote to John as her doctor and said she was very well palliated I got the shock of my life...which is the reason consultants write to doctors not to parents! Palliative care to most minds means the dying patient.  Palliative actually means making the best of something for which there is no cure. Louise has the best for her. I'm sure of that. But the fact is that it is now embedded in every cell of my body.  It can't be turned off any more than she can be cured.  I don't treat her any differently to our other children.  I don't love her more.  But I look at her differently.  I love her differently.  The fact is she's different. I asked a mother who has two, now teens, with a chronic condition whether she ever got to the point where she looked at them the same way as she looks at her other two children. She answered she didn't and I wouldn't and why should I...she and they are different. That was a big relief for me because it was giving me a burden of guilt that I couldn't shake. I accept it now (though I still feel guilty for some reason, but feelings are only feelings.).

The consultant just came and told me she'll be back now in a minute so I'll just say the last thing I wanted to say.  Louise may be broken, but that doesn't excuse me, John or her from the duty to rear her as best we can as the person God wants her to be.  Spoiling or mollycoddling will do her no service whatsoever.  Yes, she's here for a reason.  We all are. Yes, she's special.  We all are.

Here she comes. I love her. 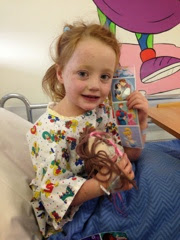