You know that story about the professor with the container of rocks that looks full up, then he fits in pebbles, sand and finally water to demonstrate how we can fill so much more into time than we think we can?

Well here I am sitting outside ballet class having miscalculated the pick up time by half an hour.  Yes I know, how can that happen? Between six children, changed class times and today trying to get every...single...item of laundry washed today in advance of Ireland's new water charges kicking in tomorrow I got it all wrong.

I actually don't really mind doing the drop offs and pick ups because I have my classic hits stations on tap, no real distractions and my back-hugging ergonomic car seat to keep me company. Little interjections during the day to recollect.  Ages ago I mentioned making good use of tiny time, for example throwing on a load of laundry while the kettle is boiling and so on.  It's amazing what we can achieve.  But at this moment I'm looking at other Moms in the cars near me, and a few dads and seriously, every one of them, (and usually me too) are just staring into space. No doubt they're all listening to the radio. Same here, Michael Jackson is asking the Man in The mirror can he change his way.

Can I change my way? Well, while up to this I've been making good use of the time it takes for the kettle to boil, I'm afraid I can't say the same about the time I spend in the car. I usually just stare ahead and listen to my music.

If you want to make the world a better place, take a look at yourself and make a ..chaaangeee...

My father spent a lot of time sitting in cars outside supermarkets and such like waiting for my mother. With neither mobile phones nor house phone in those days she had no way of telling him when she was ready. Especially since she had the infuriating habit, as I thought then but now realise it was a real gift, of meeting someone she knew and immediately entering into long conversations with them literally every few yards.  As a child and young teenager I'd wait at a respectable distance wishing she'd hurry up and sighing deeply to myself, but inconveniencing her children came second place to the person who needed my mother's incredible wisdom and empathy and her gift with words.  To this day, 14 years after she died,  people stop me in the street (or shop, where I meet someone literally every...few...yards, to the great inconvenience of my children) and tell me how my mother's words impacted on their lives.

Well, back to my father...while my mother was shopping and changing lives while choosing tomatoes, my Dad was sitting in the car minding babies and learning French!! He never to this day at the age of 86 wastes a minute.  He plans his day and what he's going to achieve and then he does it. Often when he's leaving my home after a morning brunch he'll say, I'm running behind now, I'm off to do my morning prayer, his half hour of contemplating God, many's the time through the medium of Esperanto, the international language in which he is fluent.  He doesn't say Oh it's too late now, I'll leave it out...that's not even an option.

It's embarrassing sometimes when I think of how much time I waste either procrastinating, or looking at the Internet without any real purpose or sitting in cars doing nothing but listening to oldies and I compare it to my father's productivity or my mother's living for other people.

So here's my plan...I'm taking Michael Jackson's advice and make a changeee.

Tiny time in my car can be put to much better use.

I have a load of reinforced A4 zipper folders left over from the children's school supplies. I'm taking one and in it I'll put:

Learn French in Your Car. 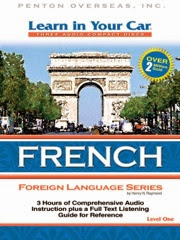 I bought this with the idea of copying what Galbraith of Cheaper by The Dozen fame, not the crazy funny movie with Steve Martin which portrays him as a loveable but incompetent Dad, but the book by his son and daughter documenting the amazing life of this very loving and funny efficiency expert who invented Time and Motion which is used today in every single workplace in western civilisation. He'd put French lessons on the gramophone every morning while his 12 children breakfasted...all 12 became fluent.   My resolve lasted about a fortnight but since my eldest is heading to France for a school year next week (don't mention it to me, I wondered would I blog about empty nests but I'd be a basket case and probably ruin my computer with the floods of Mommy tears, I'm so sentimental! so we'll leave it at that lol) 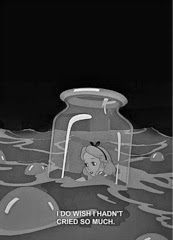 I have some motivation to improve my own French as my attempts at fluency while in France have been known to make the entire staff of a pharmacy burst into laughter.  I have no idea what I said.

If my father can learn French this way, so can I.

A Pretty Notebook for Menu Planning.

The single thing that reduces stress in my life as a mother of a large family is menu planning.  Is there anything more depressing as opening the fridge at 5 pm wondering what you can make with no ingredients and no motivation?

Pinterest has been singularly responsible for the dramatic improvement in my family's culinary life. Here's my Pinterest Board on dinners, I just pin anything I think I'd probably make and the family will probably enjoy and then choose from there each week.  It's a Godsend.

Some Notelets and a Few Stamps.

There is always, always someone who could do with a little note to say you're thinking of them, or you need to thank.  Emails and texts just don't say it quite the same as getting a little note or card through the letterbox.  Packing the stamps increased the chance that you'll actually post it by about a million percent.

I think we'll all agree it's something we tend to neglect until we hit a big worry or need a favour ( like dear Jesus, look after my girl in France, oh sniff sniff sob) but what about the daily interactions and companionable chats like we have with our family or friends.  Is Jesus not our family? Not our best friend?

There are lots of lovely inexpensive little books you can find for little more than small change. St Josemaria Escriva's classic The Way has been my constant companion since I was in primary school, it's timeless and so apt in simple one or two line points.

CTS also do lovely ones which can often be bought in church porches. 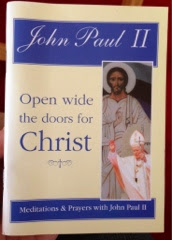 Some hand and nail grooming supplies.  My life involves a lot of hand washing and household chemicals and since I cannot stand rubber gloves, my hands take the brunt.  Sometimes it's nice to dedicate a little time to treating them to some extra care.

My reading time is much less than I'd like and since it's so limited I have a policy of keeping it only for books that will stay with me forever.  After my little girl's big operations I thought I needed some mindless chick-lit for some escapism.  After two or three books, rather than escapism I just ended up with a bad taste in my mouth.  That's when I made my resolution and I'm loving ever so slowly ticking off must-read novels of all time from my list. I'm leaving a book just for the car as I'll either forget to bring one or remember the book I'm reading is in the cold dark car just as I'm snuggled in bed.  So I've two on the go now. 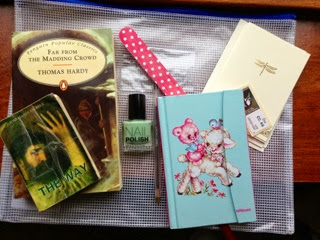 Well that's it, my little in-car kit. Maybe next week I'll tell you about my empty nest? Though as my husband keeps saying..."She'll be back".