Creating A Home Culture Of Co-Operation. Some Ideas.

Our eldest turned 18 this summer.  Oh my goodness, I spent the day looking at YouTube videos like Sunrise Sunset from Fiddler on the Roof and Abba's Slipping Through my Fingers.  Several boxes of hankies were gone through that day, much to my daughter's bemusement.

She's legally an adult now and though she's still under our protection, we interact with our older children in different ways than we do with tots.  We're still guiding and worrying and looking up the Internet for some sort of instruction book (oh believe me, we're doing that) but the bulk of their character formation and basic life skills really should be in position by age 18.

A few years ago a well known university did a huge survey among it's students on precisely that topic-the ability of 3rd level students to perform basic life tasks like grocery shopping, cooking simple and healthy meals, laundry and so on.  The results were quite simply shocking.  A huge number of students, clearly with enough intellect to get into college didn't know how to plug in an iron or cook a simple dish.

No matter what path children choose in life, it's the rare person who won't have to look after themselves at some stage.  Not to mention look after their future homes and children.  I was chatting to another mother at the school gates some time ago and the topic of children (middle school aged) doing housework came up.  She said that the children were far too young for housework at that age and that it was a bit mean to ask them to clean. My own opinion was that if the children aren't doing housework at that age there's little to zero hope of them suddenly becoming efficient and willing helpers when they turn 16.  Like all good habits-manners, diet, sleep, we must begin with tiny children.

I can't say that any of my children would choose to clean, or tidy up or indeed that they do so willingly. No big surprise there.  I can't say I was over enthusiastic as a child being expected to do my share.  However, it wasn't an optional activity so whining and complaining was always to no avail.  I can't once remember my mother saying "Oh I'll do it myself" apart from when she'd half stand up from her chair and you knew you'd better move fast because there would be consequences. Children pulled their weight and that's just the way it was. How quickly that has changed.

Being a human being isn't optional.  Acting like a human being isn't optional.  Animals in the wild teach their young how to hunt for themselves as soon as possible.  I don't think I've ever seen a nature programme where an adult animal was being cared for by his Mammy. I think we sell our children far short with our low expectation of them. Going to bed at night, washing ourselves, eating healthily aren't, as some of my children regularly try to convince me, punishments and unreasonable demands, they're part of being human.  So too is pulling our weight. All the more so in a family.  Ask any child what's Mom's job and plenty will reply to clean the house.  Actually, while she may well clean the house, nowhere does it say that's Mom's job. Pope John Paul asked families to 'become what you are-a community of life and love'

A community. Not a collection of individuals, each man for himself, each child seeking maximum comfort and entertainment and Mom and Dad facilitating it.  A community is one where everyone watches out for the other.

When Mom finally convinces herself that children doing tasks aren't 'helping her' but rather it is an act of justice, then things will fall into place. It is a matter of justice that everybody helps out, even when Mom is home full time. It teaches responsibility, consideration and so many other human qualities, or virtues if you would like to call them, that will turn good children into good adults.

Anyway, once we're bought on the benefits for children when they do their share and how much they personally lose out by not doing so, we'll definitely find a way. Each family will find their own unique path but as promised, here's what has worked in our house.

Yes, they have to help but where's the rule that it needs to be drudgery? Nowhere. I've invented all sorts of games over the years around cleaning.

Music is your friend.

See how much you can do while dancing to a favourite song or two.

Lucky Dip:  I've done this quite a lot especially for about 7-10 year olds. While they are having breakfast I go around the house with a notebook and literally write down every..single...job that needs to be done. There can de dozens, hundreds even, which would be overwhelming for a child to tackle en masse.

Pick up the pink nightdress on Isabelle's floor and put it under her pillow.

Pick up the Lego and put it in the box, put the box on the shelf.

Take the six empty shampoo bottles out of the shower and put them in recycle bin.

You get the gist. Bite-sized specific jobs they can't misunderstand or forget.  Then I'd cut them into individual bits of paper and pop them into a basket for a lucky dip.  On goes the music and off go the children.  Back and fro to the lucky dip until the house is sparkling.

Now a word of warning-you still need to supervise to spot the child that moves that bit slower than everyone else or slinks away never to return.  You know which child that is don't you?
I'd always include little jobs which would read something like 'Find the little chocolate bar in my drawer and eat it.'

I have managed to get the whole house sparkling and cobweb free simply by introducing a novelty bit of equipment such as ostrich feather dusters and fluffy gloves for wiping down furniture. 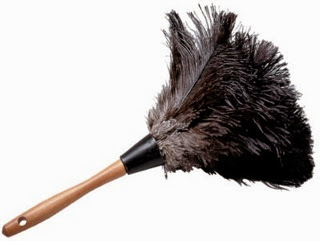 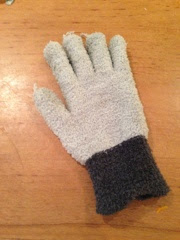 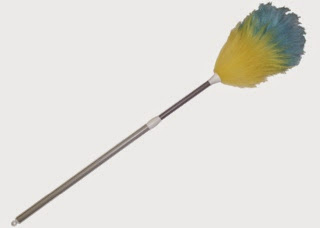 TKMaxx is a treasure trove of colourful and novelty cleaning 'stuff' which children will love.

Our 4 year old is asking Daddy to make her a low clothes-line so she can help hanging out laundry.  How did I never think of that before?  It's a great idea.

There's a popular efficiency guru whose philosophy is basically anyone can do anything for 15 minutes. I completely agree with this.  My husband and I recently sorted out our out of control attic using this method, we can all find 15 minutes a day or twice a week to tackle those dreaded tasks. Children are no different. Don't have the entire Saturday morning dedicated to cleaning and scrubbing, it'll put them off housework forever. However, bite sized sessions will show them how much they can achieve in short amounts of time.

They know the cleaning frenzy will last just two or three minutes and when Mom and Dad join in (partly to supervise for the same reason as above) it's much more fun. Nobody misses their show and you have the extra advantage of less exposure to junk TV ads.

Do X number of things.  I use this method a LOT with my teens. If I am going to the shop I'll call in "will you each do 100 things (or 50 or 20 depending on the level of chaos) before I come back?" Now one thing might be putting a yogurt pot in the bin, two might be putting the yogurty spoon in the dishwasher.  They're on a countdown and the end is in sight.
I do the same with ironing, ask the teens to each iron ten or twenty items. This has the advantage that they can watch TV at the same time if they wish.  With three teens that's up to 60 items and nobody's had to be overworked.

Before they have access to computer/ go out to play / watch TV I usually say "OK, just first do X or Y" some small job like brush down the stairs or something quick but useful. Seriously, sometimes their friends have helped to hurry them up so they can go outside quicker.

Divide a room into sections assigning a section to each child.  The added advantage to this is that the harder workers don't end up doing the hog's share of the work.  When their bit is done, off they go leaving the slackers behind.

Children don't automatically know how to clean or how to spot what's out of place.  I've had children proudly parade me into a room to show off their spotless masterpiece only for me to find the room in the exact same state it was in before they started.  Children aren't adults.  We need to show them how.

Clean with them when they're small. It can be special time doing something together.

When they're a bit bigger make a laminated chart for each room with bite-sized instructions how to clean that room.  I always had as the last instruction Ask Mammy or Daddy to check the room. This was a good opportunity to teach them how to finish a job well by helping them with the final few touches and letting them experience the pride of a job well done.  I've always found that a room stays tidier a lot longer when a child had cleaned it than when Mom does. They take ownership.

When they're a bit bigger again have a laminated chart of what's expected from each child as regular chores. 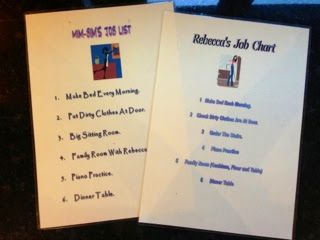 Follow through and check on their work.  As we all know, the only laws that are obeyed are the ones that are enforced.  When police are absent the The Lord of The Flies effect kicks in. Same with home laws. If rules or standards are not followed through they may as well not be there at all.

Now and again when they really try my patience I still assign a relative deep-cleaning task like tidying a shelf of the hot-press (airing cupboard) or scrubbing pots or baking trays. It keeps them out of trouble,  usually restores harmony between whichever two were at loggerheads and has almost always resulted in them doing more than I asked.  Even dirty jobs can be fun.

All the same, a carrot is better than a stick.  Praising a job well done, or done on time goes a huge way to ensuring willingness to repeat the effort.  Show Dad when he comes in. Tell the child you're proud of them. Let them overhear you telling Grandma.  Tell them God notices their efforts, reminding them of their earlier morning offering-

It makes their little prayer something that they live rather than just rattle off.

Remember, becoming efficient, and fast at doing the essentials of life frees up so much more time for the fun things...make use of that extra time.  Believe me, before long you'll be singing Sipping Through My Fingers into your hanky.