I have just been to see Disney's newest production, Cinderella. I'm writing a review simply because I have heard opposite opinions about the message the movie presents. So just as an extra voice here's my initial analysis of the movie.

Whenever I watch a children's or family movie I try to see it from a values point of view so that I can use both good and bad points afterwards in trying to teach our children discernment.  I know they will always come upon values that aren't those of our home and that's perfectly ok.  I have no intention of mollycoddling them in a false protected world which will leave them disarmed when they enter the fray. Overprotection is not a wise parenting method in my opinion.
Neither is allowing all and everything with the attitude that "Oh you can't protect them from the world". Rather I try to see teaching moments as I go along. I can't protect them from the world, nor do I want to.  I want them to get stuck right in there as active participants in this great world of ours but armoured with the art of discernment.

What I try to see is what's beyond the surface. Sometimes the surface is all there is but in general I feel no artist applies his or her trade in a neutral fashion, all art displays some of our personal ideals. It wasn't till the ending credits that I realised that Kenneth Branagh was the director of this Cinderella tale. I'd have looked forward to it more had I known. The movie has the historic elegance that I would associate with his movies.  It captures the atmosphere of the fairy stories I read when I was small, large thin papered tomes bound in navy cloth covers. The kingdoms I conjured up in my head were world's apart to some of the shoddily drawn illustrations so common in children's literature today. In Cinderella , the house, the animals, the castle all make the seamless connection with the original fairy story.  I think Branagh makes a huge effort to capture those classic qualities in this movie. The panoramic scenes of the kingdom are perfect. The choice of Lavender's Blue as a background theme evokes babyhood and early childhood for me anyway. I have dreamy memories of being soothed to sleep by both my mother and my father to this tune gently hummed. 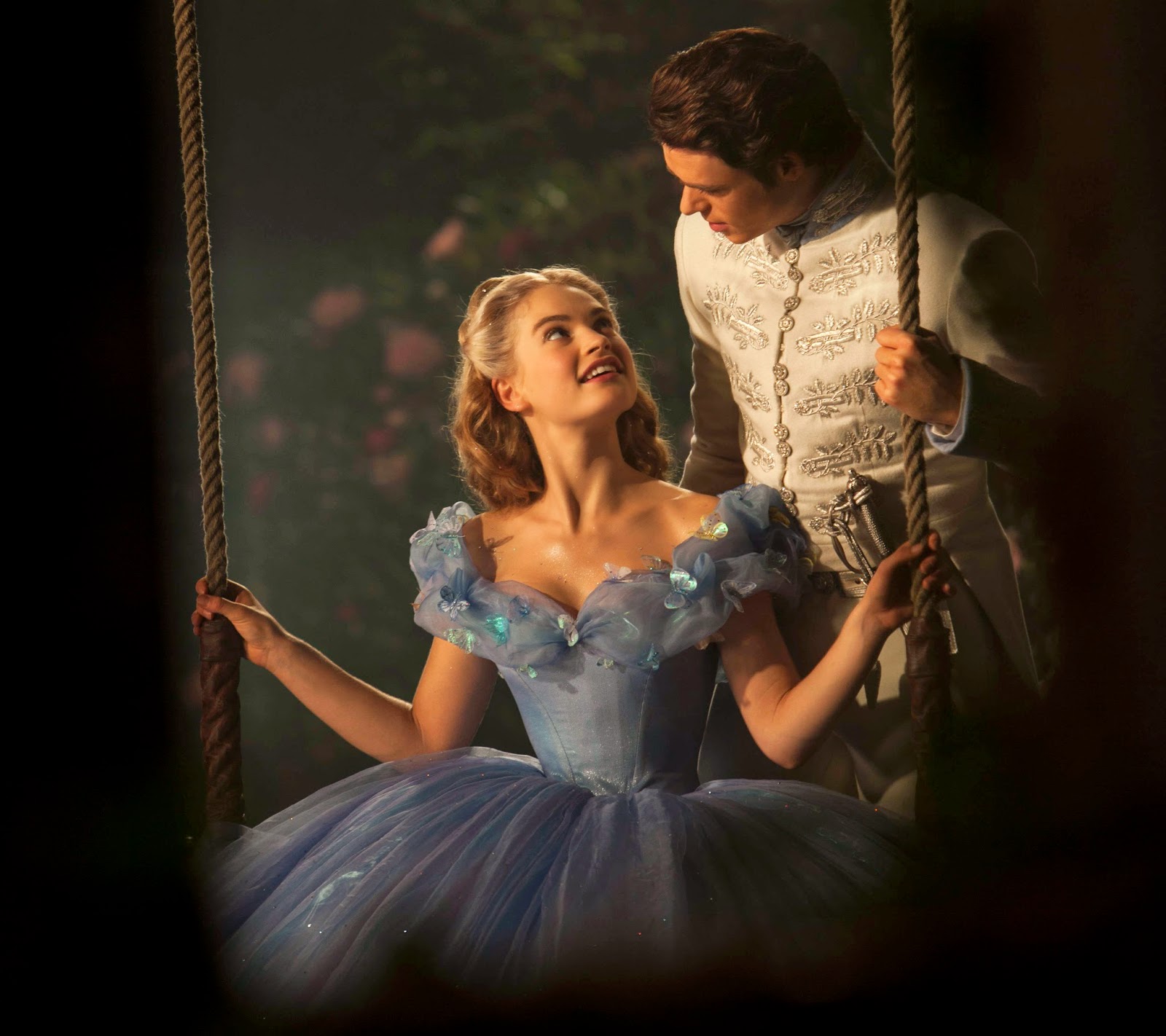 I've said numerous times on this blog about my strong belief that children should be educated in beauty. I read an interview recently with Irish sculptor Dony MacManus who spoke about this very concept. That beauty points to God and that the function of art, even if not overtly is to capture beauty and therefore reflect a glimpse of Divine. Art works best with that aim, look at the art of the great masters of paint, architecture and sculpture...all aimed to achieve something higher than the artist. McManus tells of how European art colleges have moved away from art reaching higher and toward being used only to portray self and how the concept of beauty is oftentimes laughed at and rejected as immature and passée.  Mr McManus has gone so far as to found his own Fine Arts College in Italy which focuses on beauty leading to God and precisely the human body and it's creative power as the highest form of beauty.

I'm delighted that the story wasn't ruined by any attempt to 'modernise' it by making the female and male characters somehow at odds with each other in a struggle of power. In this movie, neither character is vying to be superior or more powerful.  The prince acknowledges time and again that he is an apprentice to the trade of being a good man. He is neither portrayed as arrogant or, as is more usual in movies, an endearing idiot. Humility, as in acknowledgement of our inabilities is perhaps the most manly of virtues because without it which man can become great as he is caught in the snare of believing he already is.  Although it is not an indepth character study, he is nevertheless a refreshing movie role model.  Not loud, not a fool needing to be saved by alpha-princess, neither is he chauvinistic. He just seems to be a good man.

Neither is Cinderella seemingly made strong by being warrior-like or crass or shouty. Her power is in her femininity. She isn't obsessed with beauty but wants to look beautiful for the ball to honour her mother who she loved. She is transformed into beauty most feminine...just that dress...I want one. So beautiful. She sticks with her efforts of courage and kindness, neither of these are easy feats and neither are signs of subservience or weakness. I love that femininity is finally portrayed as a quality and not as some sort of 'betrayal' of the sisterhood.

The deathbed redemption of the King, triggered by the honesty of Cinderella and the steadfast refusal of the prince to go against his decision reminded me a little of the death of Lord Marchmain in Brideshead Revisited. (I told you I see things in movies that aren't there at all!) And the following scene of the prince and king embracing was a powerful testimony to fatherhood/son-hood, again, both men humbled but not weakened.

The wicked stepmother was a masterpiece. I'll be very surprised if Kate Blanchett doesn't win an award or two for her role. Her and whoever designed her costumes, just perfect.

The only downside was that maybe the movie was a little slow moving for smaller children. Setting the scene took quite some time and my 5 year old nodded off missing some of the more spectacular scenes closer to the end of the movie.

Also, perhaps the movie could have gone a little deeper into the consequences to Cinderella of the cruelty to which she was exposed. For most of the film it seems to flow off her. She smiles a bit too much which inadvertently superficialises her suffering.  Probably a bit more character study of the prince too would have added to the story. However, that's just me and maybe not for a children's movie.
All in all, I liked the movie.  My children aged 17-5 all enjoyed it.  It probably isn't the most memorable movie in the history of mankind but it is a refreshing good old fashioned tale of good people making a go of it.  The wedding reminded me of that of Archduke Imre and Archduchess Kathleen of Austria in 2012. Two good people hoping to do good together as a married couple, a team of equals.

Yes, it's a fairy story. Yes it's probably sugar coated, but fairy stories are good. Wiping them from our children's bookshelves in the name of modernity, or even worse...rewriting them to suit ideology, is doing our children a great disservice. They show us we are not our sufferings, they show us we can be more than how we are treated.  C.S.Lewis wrote extensively on the value of fairy stories and I tend to trust his judgement.

So I say, go to the movie, bring your teens. Enjoy it and don't feel guilty, you are not returning anyone to the dark ages just because a woman is feminine and a man is noble. Did you ever think that perhaps this is the Dark Age and that perhaps we need to reclaim the light?  Perhaps we need to reclaim both womanhood and manhood and marriage between the two as something better than the sum of the parts?

You might not see all those things but I did.