On Grieving For Paris

I've been reading a lot of social media posts asking why people seem to be more concerned about the recent horrific terrorist murders in Paris than they are about similarly motivated atrocities elsewhere this week.  There is a suggestion that this is a disingenuous reaction, that we are unconcerned about the deaths in Lebanon and elsewhere and only interested in Paris because Facebook has told us to be.  Why has Facebook turned red, white and blue and not the other colours?

I don't think it's necessarily true that people care less about the terrorist victims in places other than Paris this weekend.  I think the overwhelming reaction to Paris is a very human phenomenon related to proximity.  When we hear of a road traffic fatality on the radio the first thing we all do is listen to hear where it happened.  If it is far from us we move on but if it has happened in our town we immediately turn up the sound to hear further details. The reason is because we now have something important in common with that victim.  The more we relate to the victim the more their death affects us.

Practically all Irish families have connections to France.  I know in our home texts were passed back and forth checking on the wellbeing of French friends and their families. We have visited France and her restaurants and concert halls.  The small
Metal concert is the sort of event my own husband could have been at. Last year my daughter did her Christmas shopping in the market village which saw the jihad motivated attack just a week later. These attacks relate directly to many of us.

I don't think our concern reflects a disdain for the others but the grief that comes from losing part of our own. And also the very real fear motivated not by hatred or racism or all the multiple 'phobias' we so love to accuse each other of, but by the realisation that that could have been me or mine and it may very well be me or mine next time.

So just as we sympathise and objectively grieve the road death far from us, we connect with and subjectively grieve the particular teenager of our own town who we might not have known, but we know his grandma, we know the school he went to, he was best friend of my friend's son...we personally relate.

I think this is normal human behaviour because unless our grief is selective we would definitely all buckle under the burden of every atrocity everywhere in the world.  It would be shallow to post about Beirut if we are not also posting about North Korea, Thailand, Burma,...dozens of other places.

When I was in Africa and saw the most abject poverty and subsequently witnessed and was there when a corrupt government bulldozed the shantytown of up to a million people, my mind definitely went into protective mode by blocking me from really believing what I was seeing.  It was like we were watching it on television not really happening right in front of us and we were directly involved in the evacuation. I heard war photographers describe similar experiences. There is only so much horror any of us can process, we cannot take on every single burden but we take in some and that is not hateful.

One thing is certain these days, humanity weeps. 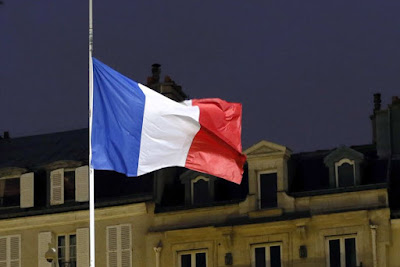