Is any year less than strange?  I can't remember a single year this last decade that I've said I'm sorry to see the back of it and yet I wonder whether that says more about me than it did about time gone by.
I've been reading Dickens over Christmas and it's interesting what he has to say about the bah humbug folk.  Basically that no year is without ups, downs, tears and laughter.  In general those goods are dished out roughly in equal measure yet there are those of us who go out of our way to only remember the bad, to only remember the tears and the worries and deliberately whitewash over all the joys, the prayers answered, the unexpected surprises and the people we've shared them with.
What is this need for self pity, this clinging on to illness almost as though we desired it? In Ireland we laugh that we're never happy unless we're miserable. Funny...and true.
So this year I'm not going to throw 2015 a boot in the rear as it slinks away...indeed there were low moments, and many, there are friends permanently lost over the cause of marriage and children's right to a father and mother, yes there were days my children and even more so my extended family suffered because of some weird notion that 'you're Catholic therefore you hate'.

There was the pathetic sight of a little girl so filled with fear they almost had to cancel her little operation.  There was crappy weather and ISIS and the mess that is the Middle East and the attacks on France which I love so much & which has done so much for my family.

And there was cancer...there's always cancer lurking waiting to ruin your year.

But hand in hand with all those sorrows...there were doctors.  Doctors who cure.  There are doctors who give hope for a future.
There were the heroes who stood up and were counted in the face of a totalitarian heave of intolerance of even debate.  There were heroes who took planes to help the suffering refugees.
There was France, beautiful France who knew how to restore drooping morale with her vineyards and sunflowers and the smell of summer holidays and sun cream which means we are having golden time with our ever growing children.  There was the moment she learned to swim when we had been told she probably wouldn't walk.  There were numerous times we had movie nights with our children's little gang who are more like cousins than neighbours...and there are the real cousins and new babies and the new life which arrived only yesterday in the form of beautiful baby Elsie.

There was my big girl and being thankful for Skype so she could join us for family moments, and then she came home so happy and grown up.  Worry...you serve no purpose in life.
There were friends who shared funny times, meals and long chats, sometimes over a supermarket trolley, sometimes in the secret world of hidden Facebook groups. There were meet-ups with old friends in Rome and in our home and new ones in England. There were grandparents and Halloween costumes and starting school, ballet, Taekwon Do and the music of piano which sometimes reluctantly filled our house.  Teenage chats and discussions about the state of the world and the meaning of life, how I love discussions on the meaning of life.  There were weepy movies with my girls and the spectacle of Star Wars.

And best of all there was PINK.  This was the year of pink. Right in the middle of 2015 on some unremarkable date, our little girl finally became pink.  And when Santa was considering a wooden fairy castle for Christmas then realised that this pink girl is not a playing fairies indoors sort of gal but an outdoors at every opportunity one, he changed track and gave her a go-Kart because girls who have been promised no quality of life tend to kick ass and expose those doom and gloom folk for what they are...wrong. Oh so wrong.

Goodbye 2015.  I close the door on you, but gently...and tiptoe away.  All I ask of you is one thing...please take your useless weather with you. 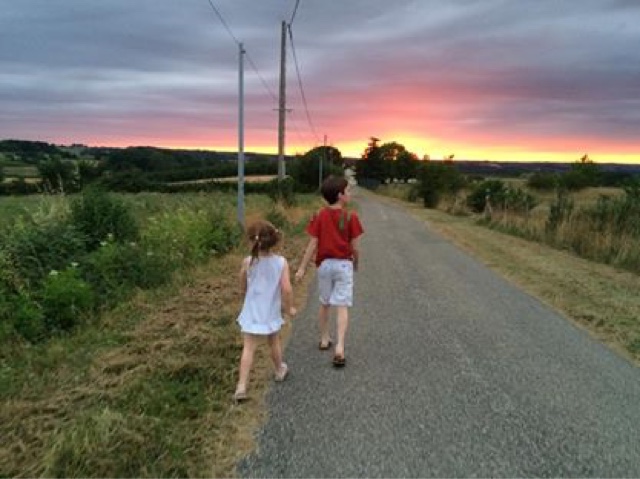