This morning, 13th May, I was dropping our two younger middle children, now young teens,  to various places involving about 20 minutes in the car.  I told one who is singing in the choir for the school's 1st Communion to wait in the church for me to pick him up after the initial crowd has dispersed because the church and the parking area are both small.

I suggested he spend those 10 minutes praying and maybe considering the children of Fatima and the lives they lived.  They asked me why I am talking about Fatima these days and I told them that today is the 100th Anniversary and asked them whether they knew anything about it or the children.  Being younger in the family, it's easy to fall through the stools as regards religious formation (Fatima coming under the category of things we would do well to believe but not necessary to the faith).  We sometimes put so much effort in giving the older children a strong moral, doctrinal, philosophical education that we forget to do the same for the younger ones.  It's something parents especially of large families need to constantly be aware of.  Osmosis has only a part to play, they must also be personally instructed (that's my theory anyway).

Anyway, it turns out to my shame that they knew little to nothing about Fatima.  So in the space of the short drive I summarised what had happened and how it has fitted into European history.  How they have been praying the prayer the angel told the children to recite during the rosary.  About communism and it's rotten fruit, about angels and Pope Leo XIII.  They were absolutely fascinated, full of questions and dying to watch some of the programming which will surely be on EWTN today. 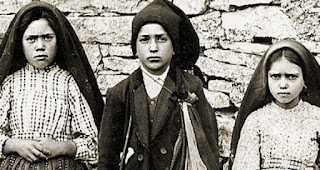 I dropped off the first child and had time alone with the other, the older of the two, as she needed to go to the other side of town.  That short conversation led to her opening her heart about her faith as regards her peers, how she can live it in a world in which religion, and especially Catholicism, is considered strange and how to stay joyful even when it's difficult.

She was especially drawn to the explanation of how love frees us from laws with the example that it's not law which prevents her from killing her beloved little sister, it's love.  The law doesn't even apply to her because she doesn't want to do that thing anyway.  The more we fall in love with Jesus, the less we are bound by laws.  That is very freeing knowledge to have...that 'The Truth will set you free'.  Can you even imagine how liberating that is for any teenager who thinks, and whose friends think, that God is a party pooper and that religion is nothing but oppressive rules.  When she sees the 'rule' being her love of her sister there's no hint of coercion or oppression.

On the other hand, I pointed out how Jesus was always so tender with sinners, especially sexual sinners such as the woman caught in adultery and the woman at the well because he knew they were looking for him, just in the wrong place like so many young people are doing, even some she already knows.  God's little ones wandering precariously, objectively blameless, because who has ever told them? Just like the biblical sheep without a shepherd, and how she needs to be tender toward everyone, never thinking badly of them.  She was drinking it in!! As she got out of the car she turned and said "This is so INTERESTING!"

(1) Don't be afraid to talk to your children, all your children not just the first one or two, about faith.  They are dependent on you because nobody else is going to tell them. Don't underestimate their thirst.  Don't presume they'll find this not boring topic boring.  If you are still amazed they'll pick that up.  How can we not be amazed at all these things?

(2) Time and again I have found the best conversations with my children have been in the car while I am driving.  It makes it easier for them to open their hearts.  I wonder if it's because there's no eye contact and it's a calm environment.  It reminds me of confession, where the priest leans in a listening pose as opposed to a conversational one.  It's easier for the penitent to offload what can at times be embarrassing.

(3) It's still morning on 13th May and already I'm seeing fruits blossom. What a great day this is!

(4) You cannot tell your children what you don't know yourself.