The advice for a long life seems often to boil down to eating proper dinners 'like grandma used to make'.  That is, cook from scratch and eat food that remembers where it came from.  I read an article today by a cardiologist saying precisely this.  Our low fat, low carb, processed ready made diets are doing us more harm than good.  He suggests returning to eating the way we did in the past, with dinner beginning with a chopping knife...just like Grandma would have done.

Interestingly, what did our grandmothers have in common? They were by and large in the home caring for families. They had time and the esteem of society on their side.  By contrast we have an incessant drive to get women OUT of the home, to cast off the shackles of motherhood and into any old menial job so that they can have dignity and the stimulation which the 'mind numbing' tasks of home and family can NEVER provide.  We have a subliminal attitude that women at home are doing nothing, that they don't have a job, that they are bored, lacking stimulation and unfulfilled. Wasting brains and ability.  I've heard it a million times.  Mind-numbing and home are two words which have become inextricably linked, simply by repetition.  Personally, not once has my mind ever been numb while caring for my home...many's the time I felt my brain cells had rotted when I was in meaningful employment.

Can any of us remember our grandmothers as stressed, over scheduled, under appreciated and resentful?  Can we remember them as bored, unproductive and consider what they did as a waste of ability? I know I remember both my grandmothers and my own mother as amazing capable ladies whose cooking abilities I could only dream of imitating.  My mother and grandmother were master crafts women, my grandmother able to knit complex Aran Sweaters in a few days while holding conversation.  I have tried knitting Aran patterns and have barely managed a line or two without having to unpick my mistakes.

I'm not saying that women who don't engage in paid work are always considered unproductive.  Once we are involved in something else...something separate from the home.  In that case we may well be fulfilled.  Be it volunteering, study, a cottage business, writing, blogging...In those things lie our value as seen from the lofty ramparts of our society.  Women are encouraged to do something...anything  so that they can identify as that thing and not as the 'nothing' status of SAHM.  But the precise work of the home?  Nothing is considered more demeaning, more backward, more 'submissive', more  unfulfilling for a woman than making a bed, cleaning floors, hanging laundry in one's own home for one's own family.  So much so that rarely does a week go by as some article laments how women are still doing this stuff.   Mind you, were a woman to start a small business and receive money do for others what she freely does for her family, now that would be contributive to society, that  woman would now be a business lady with status and value even though she is doing exactly what she previously did.

Or perhaps we can still identify as the thing we did in a different life, in a distant memory.  I remember filling out a birth registration for my fourth child.  I had LONG given up my old job with zero intention or desire ever to return to it.  The lady taking the registration asked what was 'Mother's Employment'.  I replied Full Time Parent.  'Oh no...snigger...we can't have that!  What were you BEFORE?'   So against my will, my child's birth certificate falsely identifies me as something I wasn't and which I had no desire to be.  All to protect me from the shame of what I actually was.

I wonder if we look back at those home cooked dinners, breads and cakes, at the cosy clean homes we would return to daily and rejoice that those days are gone?  Are we delighted that all too often we are so busy and stressed and overworked that the best we can hope for at dinner time is something ripped from a printed box and shoved in an oven? Is that a big life improvement over that of the women who cooked and cleaned with babies in tow and who afterwards sat down to pick up their knitting and who always seemed to be calm and content and spread that to their families? Do we look back in dismay that children walked to schools and activities because the family had one car, if that, and women weren't tied to evening traffic leaving little to no time for chopping vegetables or stirring pots?  My memory of my mother strongly revolves around kitchens and the aroma of cooking food and chatting to her as she prepared meals or knitted cardigans and blankets for the next baby.  My memory of my mother, my grandmother and every other woman in my circle of experience is women who were highly valued, around whom life revolved, women whose worth was never questioned.  In a lot of ways they were the ideal.  As C.S. Lewis once put it: 'The homemaker has the ultimate career.  All other careers exist for one purpose only - and that is to support the ultimate career'  Not so now, my dear, not so.

I'm not saying life was idyllic and rosy. Sure, they worked hard, sure times were tough but I think we know enough by now to realise that tough times and hard work aren't impediments to happiness and equally that prosperity doesn't necessarily equate contentment.

Where has contentment gone?  It took leave of us without us noticing.  We've been too busy to notice the stealth with which it departed.  In retrospect, it doesn't take much effort to see the effects of it's loss.  Remember homes were places of peace where we would recharge instead of centres of rushed coordination of activities where mothers are reduced to cart horse event managers who might love the idea of sitting down to knit or paint...or to cook a dinner from scratch, but just don't have time? Who exactly has benefited from the downgrading of the role of  women at home? It sure as hell ain't women! Or children, Or health, Or marriages, Or family life. Who has benefited?  That's what I'd like to know.  The processed food industry is the only thing I can think of.

No wonder our hearts and bodies are rebelling. 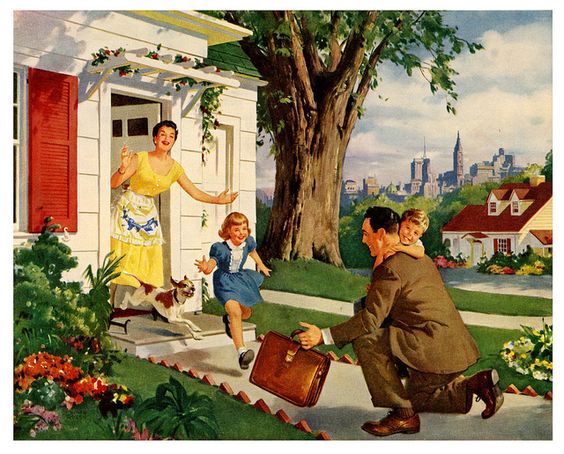