People have a lot of things to say about facebook.  Some love it and dip in and out of it many times each day, carrying it with them in their back pocket. Some enjoy it as an occasional activity to keep in touch. Others are signed up and enjoy having a peep and are happy to leave posting to other people.  Some open an account and that's the end of their relationship with facebook.  Plenty are quietly disdainful of it, considering it for the plebs and a waste of time and others still are not only disdainful of  facebook but also of anybody who lowers themselves as to admit to enjoying it.

Me?  I love it...and here's a little story to illustrate why.

For part of John's medical rotations we had to live overseas for a year.  During that year we made some of the closest friends we have.  On our return home, we had promised to keep up the friendships and distance was going to be no obstacle.  In the back of my mind I had a little fear that they would visit us once or twice, we might visit them once in a blue moon (travel being cumbersome and expensive with a lot of small children in tow), we might telephone from time to time and gradually it would flitter out in spite of all our best intentions.

Well that was  ten years ago now and the friendships all stayed strong but contact and day to day interaction just wasn't there as much as we would all have liked.  Visits were the exception and to telephone you needed to factor in an hour of time.  As you know, when you speak to somebody after several months the conversation goes something like this:


You get the drift though the chats maybe weren't quite so boring as that.

It was a bit sad.

I opened an account because my cousin told me to and left it at that for a long time, I didn't really 'get it'.

Then I built a farm because my sister needed neighbours so she could buy more crops and that was the start of my real interaction with facebook.  I deleted my farm some months later when I realised that I could have  grown a beautiful real vegetable and herb garden in the amount of time I'd wasted growing and harvesting nothing. It was one of the biggest reliefs of my life to be released from the burden of constantly having to harvest crops and milk cows that didn't exist!!
I still loved facebook though..I loved the banter, the craic, the funny videos, the sad videos, the status updates.  I even liked the pokes, although I still don't really understand how a bunch of people in a room came up with the idea...
"Hey! I know!! We can let people POKE each other...It'll drive them mad...it'll be HILARIOUS!!!"

Well back to my overseas friends.  One day early this year I checked my facebook to find a message from our very very dear friend requesting prayers for his wife (who is also our very very dear friend) who had been admitted to hospital with unexplained and very severe pain in both her legs.  What followed over the next few weeks was extremely worrying for everyone involved and when we went for some days without hearing anything I'd fear it was because of bad news. I didn't want to be constantly messaging them so I relied on another dear friend to keep me in the loop. All we knew was that the pain wasn't going away and they could find no cause.
One day John, who is a doctor, surmised aloud his fear that it may be something coming from the brain.  My heart sank to my feet as he is definitely not an over-dramatic person (like I tend to be :-) ).
Lo and behold, the next message we received was the hospital were doing a brain scan on my friend who I knew I loved, but only at that moment I realised just how much.  How often it takes the thought of losing something to recognise just what we have.
After a long and anxious few days the result came back clear and the final tenuous diagnosis from the hospital was some sort of unusual virus that would eventually pass.  It was some time after that that a very weakened and worn out version of my dear friend was well enough to return home.

So what a relief.  However, before this had happened, my friend had been looking forward to going on a retreat with her Mother and her sisters and now she just wasn't up to going.  She was broken hearted to be missing it but had instructed the others not to miss it too on her account.  So she prepared for a weekend home alone as hubby was working and her teenage children were away.

I felt so sorry for her.

Then I spotted this status:

Reservation at 7pm, am informed that the red is open and breathing, potatoes are "chipped", onion rings, gigot chops, breaded mushrooms and garlic dip - ooooh, can't wait. He's got "The Edge" for us to watch too - ha ha, brilliant! Granny needs to go on Retreat more often! xx

Her Dad had telephoned her to tell her he'd cooked her dinner.

Now I have met this man only a handful of times so I don't really know him very well.  What I do know is this.

(2) If he catches you cheating on the annual Easter-egg rolling competition (with huge prizes of things like 21p or 76p if you're really lucky) you will never cheat again!! 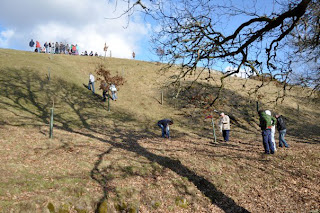 So this is really why I love facebook...because I knew my friend was having dinner with her Daddy.  I knew the bottle of wine was open and I knew she was going to have a lovely evening.  I never would have known that if I had telephoned her three weeks later...it would have been.."Ah, no news...same old, same old.."