I Don't Like To Say It, But Christmas Is Approaching.

One day last year around the end of November or the beginning of December I posted a little link on Facebook to something I thought would be a nice Christmas gift for someone to give. It got such a good reaction that I decided thereafter to post a gift idea every day of something I thought was either a good buy, something I, or one of the children, had received and loved or indeed, something I had bought for myself and loved. A lot of my facebook friends loved the ideas but said it was a bit too late for them as they (like me) had already completed all their shopping.

Personally I'd like to have most things organised, bought, baked or cleaned by the start of Advent.

The thinking behind this is so that by advent all toy catalogues, talk of get ,get, get and I want, I want, I want can be banished from the house and the children, and us, can actually spend Advent properly preparing for Christmas. Some year, that's what I hope will happen, though it almost happened a few years ago and it was the most relaxed Christmas we ever had.

So over the next few posts I'll be rehashing the ideas I posted last year and then after that I'll post some of the lovely things I have come across since then. I am fully aware of how tight budgets are and so most things will be either inexpensive or else worth the investment. I hope John reads this as I'm going to post at the end the pressie I want him to buy for ME!! :-)

So here's the first few items, I hope you can grab some ideas from them or at least set you off on the exciting path of finding the right pressie for the right person..


Oh and by the way, one thing you won't be seeing here is Christmas being called 'Holiday'.

One of our girls is the world's greatest worrier, she has spent many's the hour pacing the floor in anticipation of the most bizarre things that MIGHT (though HIGHLY unlikely to) happen. The same girl is one of the best at kicking in and taking charge with efficiency when a real crisis occurs so her worries are generally all hypothetical. She got this little gift a few years ago of a beautifully boxed set of worry dolls. The dolls originate from Guatemala and are still made there as a cottage craft industry. The legend is that you tell each of the dolls one of your worries at night before sleeping and place her under your pillow...she takes your worry and that's the end of it. Now the placebo effect of this is pretty effective for a little child and even if it doesn't cure irrational fears, at least the child feels they've passed it on. 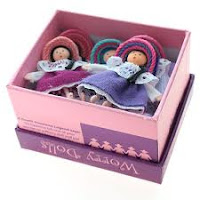 The little set is very pretty and though my little worrier has moved on, she still loves her little dolls and an odd time I find one or two under her pillow.


Her set was purchased at a craft fair but you can get them online (from Amazon and others) for prices from €2-€3 to about €12 depending on the quality and packaging. I can think of a few of my friends who would love these.

GIFT IDEA 2: THE BOOK OF VIRTUES

The Book of Virtues is an 800+ page collection of stories, poems, speeches and so on, each of which illustrates a moral virtue such as courage, compassion, loyalty, fortitude. They range from short pieces to quite long stories.

I bought this book as a gift to put away for all our children when we had about three tinies and in the dedication to them I wrote on the inside cover I always left a comma after the youngest child's name...just in case.
I had just about given up hope of adding another name after Peter's (our one and only boy) when dear Louise came along.

It really is a lovely book which would be a perfect present for a godchild, recently turned teenager, a student heading off to college or newlyweds...or anybody in fact.
I still dip into it from time to time and my favourite story is the tale of The Husband Who Was To Mind The House...every husband should be made to read it :-)

The Book of Virtues is aimed at older children and adults but for the little ones there is also a series of some of the stories adapted for 4-8 year olds beautifully illustrated by Michael Hague. 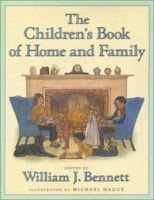 In fact any book illustrated by Michael Hague is worth buying...I have worked with books and children in a past life and he is in my opinion one of the nicest children's illustrators. He has illustrated such books as collectible versions of Tolkien, Aesop's Fables and The Velveteen Rabbit.

Check out www.michaelhague.com for a visual treat.

A very good friend of mine gave me this gift a few years ago. Even though it is marketed as an apple peeler for home brewers and preservers, it works equally well on potatoes. With eight in our family there are a lot of potatoes to peel and this reduces the time it takes to a fraction if that it takes to do it by hand. It has a lovely vintage look to it and looks well on display, also meaning that it is more likely to be actually used than many much more expensive kitchen gadgets and impulse buys.
(Which we can all immediately visualise and which are taking up huge amounts of our precious kitchen storage space...but that's a post for another day.)

Also, because it is so much fun it's much easier to convince the small plebs (or...even teenagers!!) to do it for you!! They (the teens) have even had the innovative idea of deep frying the lengthy skins afterwards as a yummy snack and reward for their exertion. 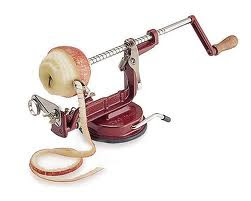 A word of warning- if you go to a specialist kitchen shop you will pay much more than if you shop around.
I have priced them from €12-€15 right up to €30-€40.
Have a look online for the best deal.

Well those are the first few of the many ideas I'll be posting over the next while. I hope they're helpful.