In Defence Of Housework

Yesterday was Monday. It was raining like I haven't seen in a long time, the house was in a mess and there was a backlog of laundry after the weekend slack. As I started my trudge around the rooms beginning to get the place back in order, toddler in tow, I was wondering to myself whether we had children living in our home, or rats?

I was seriously thinking maybe we'd be better off with rats as they'd probably be tidier.

I have an iPhone which is a bit of a mixed blessing, which I'll go into in another post, but for today, suffice to say I have it. One of my (many) techniques of efficient housekeeping is to set the timer on the phone for a certain number of minutes and try to see how much I can get done in that room in the designated time. Then I turn on TuneinRadio app on which you can get any radio station worldwide. Today I chose a love-song station to accompany my efforts. Honestly I was not in the mood for housework...I'd rather be blogging :-)

Then this song came on:


Everything changed...my mood lifted, I moved with speed and efficiency, whisking up bundles of dirty laundry, whipping beds back into shape, spraying cleaner fluid and polish with aplomb while singing and swaying as though it was me on that Motown stage!!

As I was going along I was interiorly composing an upbeat blog post about favourite housework music and how it can have a positive effect on how much we can get done. Oh yes, this would be a nice cheerful one which would help all my readers (lol) to compose their own song-lists and let loose on their homes. 11am and over my second cup of coffee I browsed online for a nice positive housework quote to use...

but all I could find were quotes praising not doing housework, stereotypical scathing attitudes of women who actually keep house along with enough sarcastic references to men to fill a book.

'Few tasks are more like the torture of Sisyphus than housework, with it's endless repetition, the clean becomes soiled, the soiled is made clean, over and over, day after day..'
Simone de Beauvoir

'A clean house is a sign of a dull woman'
Unknown

A few months ago I gave a presentation at a seminar called The Organised Home. The seminar was booked out mainly by young mothers who all freely admitted to feeling that they were drowning in their own homes because of housework and admitted that they didn't even know where to start. None of these young Moms said they were happy to rock their babies because babies don't keep in the midst of clutter, dust, breakfast dishes sitting in the sink and with no plan of what the family was going to have for dinner that evening. Instead if being able to delight in their rapidly growing babies, they each felt stressed, unable to cope and guilty that both the babies and themselves were losing out because of their lack of home skills. They were crying out for direction and some advice as to, believe it or not, how to do housework so that they could be freed up to cuddle their baby, enjoy their spouse or engage in abandoned past-times.

The generation almost all these young women came from was one which saw huge changes in parenting styles. Previously children had been expected to participate in household chores before they enjoyed recreation. Free-range children became a mantra which quite often wasn't thought out as to the far reaching repercussions and this was the first generation to be utterly over-scheduled with extra-curricular activities to the point that lying on a bed reading a comic was quite simply something there was no time for.

About two or three years ago, the findings of a study which had been undertaken in University College Dublin were published in the national newspapers. The study was about how the third level students in that college were able to perform ordinary human tasks. The results were shocking. A huge percentage of these students, who clearly had a modicum of intelligence displayed by the fact that they had secured a university place, were unable to do simple tasks such as cook a healthy meal, iron an item of clothing, operate a washing machine or shop for groceries. Unfortunately I cannot just now put my hand on the figures but it struck me that while a third level education may well prepare young people very well for the work place, the students had been failed somewhere along the line by being left ignorant of how to look after even themselves, let alone future children, homes and so on.

The more I mulled this over in y mind, the more I saw that work which takes place in a home is probably one of the most openly demeaned of all forms of work. For example, stay at home Moms are quite regularly prefixed with the word only. So much as mention on Facebook that you are ironing or that you have baked a cake, you can fully expect comments like 'you need to get a life' and an attitude that you have let down the 'Sisterhood' by being so subservient and 'wifey'.

But think about this:

Where are you happy to return to after a stressful day at work or tramping around shops?

Where does the heart of every member of a diaspora long for on days like Christmas or Thanksgiving?

Where would you rather be than anywhere else in the world when you are in hospital with your very sick baby?

So if home is so important, why then is the effort involved in making it a happy, restful and harmonious place to be so disdained? I really would love to study this.
Ideally a home is where the members go to recharge in order to head back into the world but if the home is where you find disorder, disharmony, bickering over tasks and constantly running late searching for mislaid 'stuff', how on earth can the family members bring peace and refreshment out into the world with them? I really can't see how rearing children to be helpless adults, ill equipped for caring for themselves is giving them any advantage in life. Most extra curricular activities are dropped like a ton of bricks at the first opportunity anyway and an attitude that somebody else, be it a mother, father, home help, school, city council, spouse, judicial system are going to sort out your cluttered life breeds anything but happiness.

Housework aiming, not as an end in itself, but as a tool to help the home become a launching pad of great adults is not demeaning, is not undignified and is certainly something that is worth learning how to be good at in order that time is made for the important things in life, like cuddling my baby because babies don't keep.

Over the last 17 years, out of necessity in order to save myself from drowning in my home, I have gleaned lots of ideas and techniques of efficient and speed homemaking through reading, study, trying out and fine tuning methods. I am most certainly not a domestic goddess which is regularly illustrated by my superhuman leap across my kitchen if I see someone unexpectedly about to open one of my cupboards or my fridge!! But I have learned a lot and I will be passing on lots of it in future posts so you can take what suits you and laugh your head off at the rest, I don't mind either way :-)

Now back to my laundry pile...
...and let the 'Sisterhood' make of that whatever it likes...Sister. 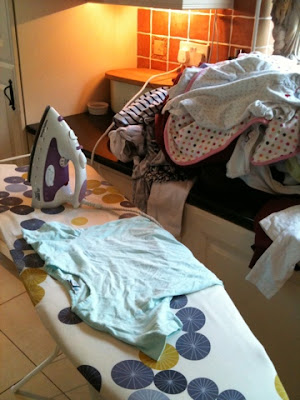