I willingly admit that I was never really the world's most successful gift buyer, or necessarily the most thoughtful. When I was about 17 years old I was known one Christmas to spend all my babysitting money buying great LP records for all my siblings.

The fact that the albums were not necessarily the bands or music the recipients actually liked seemed to miss my observation in the midst of my excitement that every album released that year that I really loved was coming into the house that Christmas!

It didn't miss my siblings' observation though and I am still to this day being reminded of my less than altruistic motives that year.

When I started working I had a little more funds available but my buying strategies didn't improve much. In fact not at all. I'll give an example:

My sister who is a year older than me, knowing my lack of shopping prowess, informed me when I was heading out on my shopping trip that she would really like a book by the American novelist and Catholic writer, Flannery O Connor.

I was delighted so armed with this tip-off I headed to the largest book-shop in the city. Without any ado I went to the shelf where I might find Flannery O Connor books.

There were none there.

Not to be put off, I peered and peered at the shelf where the book should be and in the end decided to buy the book that was occupying the spot where the desired book would have been had it been in stock.

This is what I gave my sister for Christmas that year: 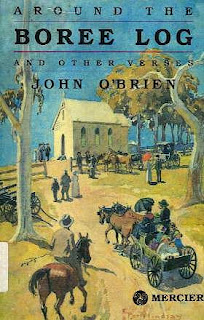 Poems from the Australian outback.

I will never forget the blank look on her face when she opened the present!

Actually in retrospect, it was probably the best present I ever bought anybody as never has a present provided such merriment so many years later. The entire family still laugh at my thought process, or lack thereof, back then. To be honest, I'm not too sure whether I've changed that much :-)

Recently my sister who got this great present came across it on her bookshelf and started reading it. She told me later that she really enjoyed the poetry and though it was still a mystery to her how I thought that she wouldn't notice that the book wasn't by Flannery O'Connor but rather John O Brien, she's glad to have it all the same.

For your pleasure, here's a little sample of the poetry of John O Brien
(Patrick Joseph Hartigan 1878-1952):

I think I'll buy her a Flannery O'Connor book this year.