Husbands, Presents And The Silent Treatment

Before I continue with my list of Christmas gift ideas, I just want to interject with a little...well..interjection. When I announced to my Facebook friends I was starting a new blog, one of the enticements I used was a promised little tip that might make your marriage a little better. Of course, I should have known that would lead to some hilarity, along with something of a lowering of tone, if you get my drift, in the following comments surmising as to what that tip might be...

So not to disappoint, this post is all about that marriage tip, which concerns the contentious issue of husbands, birthdays, anniversaries and the silent treatment.

When my husband and I began dating, he was in Pre-Med. That is, year one of his six year medical course, so our dates were mostly based on things that cost little or no money. Meals out generally involved us sharing a £2 tub of noodles while sitting on a wall chatting. We didn't mind in the slightest as we had a lot to talk about, having made the decision to marry after only six weeks.
It was our secret for a long time as you can imagine-I personally wouldn't have fancied the task of having to inform my parents at the age of 20 with six years of college ahead of me that I was getting married!

Anyway that's a by the way, the fact was we had no money for wasting but I was never short of receiving gifts that meant the world to me. Every morning we took the same early bus..me to work and him to college. It was lovely. In the winter when it was still dark the driver would have the bus so cosy with the lights dimmed and Lyric FM playing soft music. Nobody ever spoke much on the early bus and John and I were no different and usually just dozed off side by side. I have kept the jumper he often wore on those mornings and it still has that cosy, snoozy smell.

One freezing morning in the middle of winter we got onto the bus as usual and as I snuggled down for my morning snooze John handed me something tiny and beautiful...

No, No, No!! NOT an engagement ring!! (that was still being saved up for in fivers!!)

It was a tiny posy of the first snowdrops of the year bound with a little piece of string and wrapped in foil with a drop of water to keep them fresh. He had spotted them the evening before and gotten up a little earlier to get them for me.

It touched my heart. 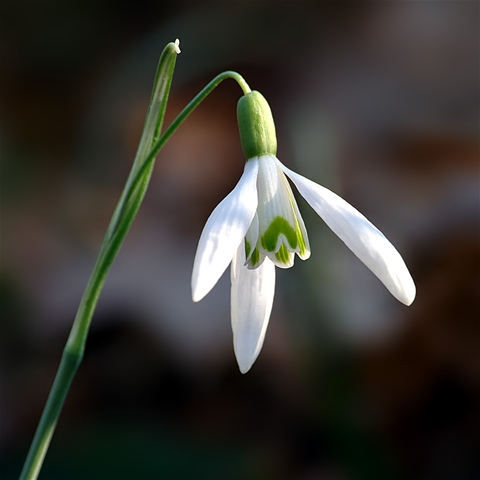 I'm sure I probably have that little posy pressed in a book somewhere and will stumble upon it sometime when I least expect it. That'll be nice.

Well a few years later we married and played house for a year and then we played Mammies and Daddies for a few years until inevitably John finally began earning an income and I gave up work to be at home all the time with the babies. And so began the eggshell walking for my poor husband. While a pretty hand picked posy wins brownie points when money is non-existent. Does it strike quite the same note when presented at Christmas, or Wedding Anniversary, or Birthday?? Like lots of (if not most) women, and I daresay probably FAR more common in the first ten years of marriage, I presumed that because my husband loved me he should automatically know that I wanted him to buy me flowers because it was Wednesday, and it was February, and rainy, and because someone blew their horn at me...and HE would KNOW that if he really, really loved me!!

How can any guy win?

I guess it takes years and years to learn that love and mind-reading are not a package deal. When a man marries he thinks that his wife thinks like him. The big error here is that she thinks he thinks like her. I have heard this difference many many times and still all of us women fall into the same trap time and again-that of thinking that our husband, or boyfriend should have infused knowledge as to what we would like them to give us. My husband was a great present giver when we had nothing at all. He was even a very good present giver when we had very little. But then you 'grow up' and hit 30 something and he starts to think maybe I'd like this, or that and that price should be factored in.

Now I am not much of a diamonds gal. I love, love, love my little pink sapphire and diamond engagement ring which was paid for in fivers. ( and the man felt sorry for him and rounded down the price) Just as well I like it as I can't see it ever coming off!!

And I love the fact that God has given us the ultimate diamond...a whole PLANET made of diamond. Here's my post about it on Louise's blog;

But those two diamonds apart, diamonds aren't really my thing. I do have a friend who told me that diamonds are the most important thing in life, which is a bit strange since she has three children. Me? I'd honestly feel a tiny bit disappointed if I opened a package and found a diamond. That makes me sound spoilt and ungrateful but I'd be thinking how much did that cost?? What can you do with it only nothing? Or show it off and everyone would be jealous...no thanks...I'd rather have a Rocking Horse. 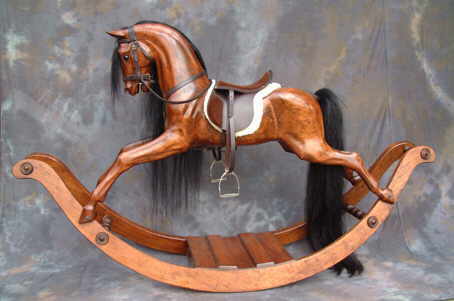 One day when we lived abroad I had dropped my eldest to school and just had my three year old and one year old with me. It was a lovely sunny day and as I was driving through the picturesque rolling hills I spotted a small hand painted sign. 'Rocking-Horse Maker'. That's all it said. It took me a few weeks to pluck up the nerve to follow the sign down a lane and back in time and knock on the old wooden door of a very pretty stone cottage. The door was answered by a rotund oldish, but not too old man with a huge white beard and long white hair resting on his shoulders. I have a funny feeling it really was you-know-who. Honestly..this really happened, I'm not losing the run of myself!

Well I lied to you-know-who and told him I was planning on investing in a rocking horse and did he have a catalogue? I was delighted when he told me he had a little showroom/workshop and that he had a horse almost finished, would I like to see it? When he opened the shed door there was this vision of a horse...I couldn't take my dilated eyes off her, she was just perfect. The man lifted my three year old up onto it and I honestly believed the horse was going to toss her silky mane and come alive. I even think she blinked...Ok Ok, that's an exaggeration, but I thought she might. 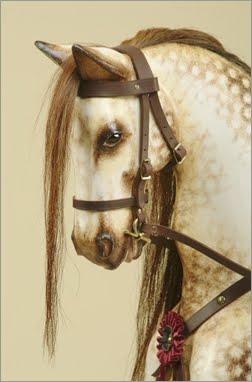 That evening when I informed my husband that I was going to save up every penny and when I had enough I was going to get a rocking horse. He replied with the simple question which popped that bubble and brought me back down to earth..

'And where are we going to put it?'

Well I know we'll never get a rocking horse, they're huge and expensive but how could my husband ever guess that I would prefer a rocking horse to a diamond ring? He couldn't, that's how. Unless I told him.

Poor man. I still had the idea that I was easy to buy for because I liked so many things. The problem is they weren't your usual common or garden wifey presents. I still thought he should know what I like since he's supposed to be the knight in shining armour. And I still never told him what I would like because I thought that would take the good out of it, that I'm not impressed by price, or brand and he still got the silent treatment. Not that day..I'd hold my fire for a few days or a week until some imagined slight and then I could hold my tongue no longer...

'Why did you think I'd like such and such?'

Not a very virtuous wife I think!

Here comes the marriage tip. So many couples live out this same scenario and it's always the man who comes out worst. So your birthday is coming up...for goodness sake girl...tell him!! It's your anniversary? Tell him the day before so he has a chance to do something. In reality it really is very babyish for an adult woman to go into a huff because she deliberately didn't remind her husband of a special day coming up. A husband's love should be measured more by the day he went out in the rain to change your tyre, that you destroyed because you continued to drive on the puncture, (even though there was a smell of burning rubber polluting the whole area and sparks were flying out of my wheels and everybody was staring at me) and didn't complain about it than by the forgotten date.

Some time ago I had the great idea of ordering myself something lovely and then not open the package and give it to John to give me. It wasn't that romantic so he always ended up adding to it.

I have discovered the Amazon Universal Wish-List Button. 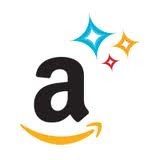 This is a very simple to install button you download to your toolbar. Thereafter whenever you spot something you like anywhere on the internet you just click the button and there it is on your amazon wishlist, showing what website you found it on, price and a space for notes like

and suchlike.
Or you can write..for Grandma, for X, for Y etc.
If you do this all year after a while you will forget what you have put on it and there will be a large selection of ideas to guide your man (or anyone else who wants to buy you a present)

Last year I did that. I had a great selection of things on my wishlist and I remembered to tell him. I got a present which I loved, but nothing from my list. When later I enquired why he didn't use the list he said he looked at it but he didn't think I'd like anything on it.

I rest my case.

So this year I told him that no, really, if I've put it on my wishlist, I think I'll probably like it.

But if I get a Lift-The-Flap book I've forgotten to label for Louise...there just might be a silent treatment.

blog directory
Posted by Jennifer at 10:34 AM