Heaven Is BETTER Than The Anchor Beach

You know the way the ocean triggers profound thoughts?  Well this weekend just past we went to the ocean to spend some time together just as a family, just us, no phones, no computer, no doorbell ringing a thousand times a day, just us. All eight of us. As usual the weather forecasters promised us misery, wind and a wash-out so we packed rain gear, books, pencils and I brought along my new knitting project...a sweet custard coloured cardigan for little sis.  As usual the micro-climate along the west coast defied all forecasts of doom and we had amazing weather, if typically nippy for April. So we wrapped up and spent lots of time on the beaches of The West Of Ireland...stunning. 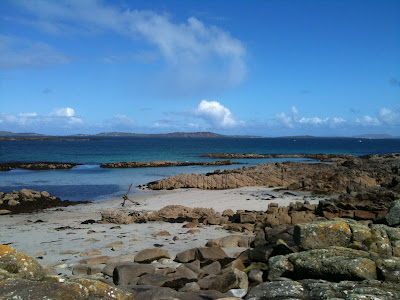 This beach is Aughrus Beg in Connemara looking out to Inisboffin and I took this photograph just with my phone, no filters or settings, just as it looks.  I literally could sit here forever  and just think things.  So I took the rare chance to sit in the car for a little while and let the children have some 'Daddy' time (my generosity had nothing to do with the wind-chill) before joining them.

As I sat and admired the amazing colours of navy and turquoise and the breaking waves a bit off shore where the water hit the granite rocks I started thinking of the majesty of The Creator.  Just look at those colours...how many artists, poets, photographers and writers have tried to capture their beauty over the years, some getting pretty close but none quite reaching the mark.  Who could ever manage to mix the correct combinations of azurite, malachite and lazurite to match those of the Divine Artist?

I peered out to sea, partly hoping to see a dolphin leap out of the water, even though I've never heard of dolphins in that bay but you never know, and partly trying to strain my eyes to see the islands off the coast, wishing, as I always do, that we hadn't forgotten the binoculars. If I could see far enough I could maybe see my friend, who lives not 6,000 miles but rather €1,000 away.  And all the while my train of thought continued.  The Divine Artist.  God the Creator...God the Artist.  My eyes stung a little as I tried to discern whether that white feature in the distance was a boat or a lighthouse.  God the Artist painting the ultimate masterpiece.  I can't see whether that is a boat or a lighthouse...what else can I not see?

Then I remembered watching a documentary a while back about hummingbirds. I've never seen one of those insect-like iridescent birds and maybe I never will but it really was a very interesting documentary.  It was about how flowers use iridescence and ultra violet to attract insects, and in this case, hummingbirds.   It seems that the colour of the flower isn't really what differentiates the species...it's something else...that the simple lens of the human eye cannot make out, it is completely invisible to us.  I'm not a naturalist and can't explain it so well as one so have a look at this short clip, it really is worth watching:


All those beautiful and stunning sights we'll never see.  Wouldn't it be amazing if we could have a glimpse of what else the Divine Artist has conjured up.  Do we think His imagination is limited to the range of colours the rods and cones in our eyes can distinguish?  What colours are we missing not only in the flowers, what about the sea? What about the sunset? What about the eyes of our babies???  What has he made for us that we won't see till the last day?

What about Heaven? What's that going to be like??!! Oh My Goodness, if there are stunning sights lined up for us here on Earth, do you think that God is going to sell us a pig in a poke when we die?

No eye has seen, no ear has heard, no mind has conceived what God has prepared for those who love him

But we have seen the invisible iridescence and the invisible ultra-violet flower patterns, we've seen them with the help of technology.  So just what is it God has prepared for those who love him?  We can't even imagine, so it says.  But that doesn't mean we shouldn't try to imagine.

The Christmas after my mother died I saw a review of a book that looked like it might give my father a bit of a lift.

A Travel Guide To Heaven 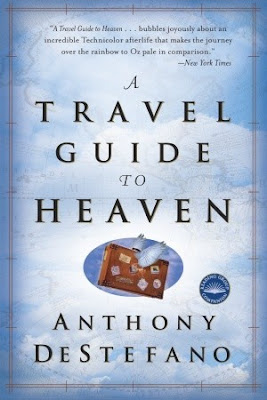 It was endorsed by lots of people I trusted such as Fr Benedict Groeschel  & someday I might tell you how he unbeknownst to him broke through a post miscarriage prison of grief. (I said might, not will), Quincy Jones, Raymond Arroyo, Mrs Bob (Dolores) Hope and lots of others. It was only about three or four days before Christmas but I was impressed enough by the reviews to pay the high courier charge to get it delivered in time.  I'm glad I did.

It puts paid to the boring, un-enticing idea of Heaven many of us have built up.  Rest In Peace? Peaceful rest forever???...no thanks!! If any of you know somebody who is bereaved, or who is facing bereavement, or facing their own death, this book will give them, or you, such a great idea of Heaven we'll be just dying to get there!! (ho ho ho, the old jokes are the best eh?)

Well anyway, back to the beach...what profound thoughts the ocean stirs in the soul.  Rest in peace? I've had enough peace, time to join my family and the very, very visible and audible manifestations of joy, except for one small girl in Daddy's arms, her face bleary and covered in nasal slime and tears, none too impressed with the sea..er..breeze?!! 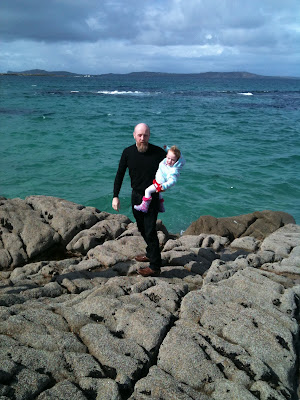 Addendum:  Do you see that sea in the background?  In the summer when it's a bit warmer you'd better bring your swimming suit along because you'll have no choice but to jump right in!! So don't be found wanting or improvisations will be made...Be Warned ;-D